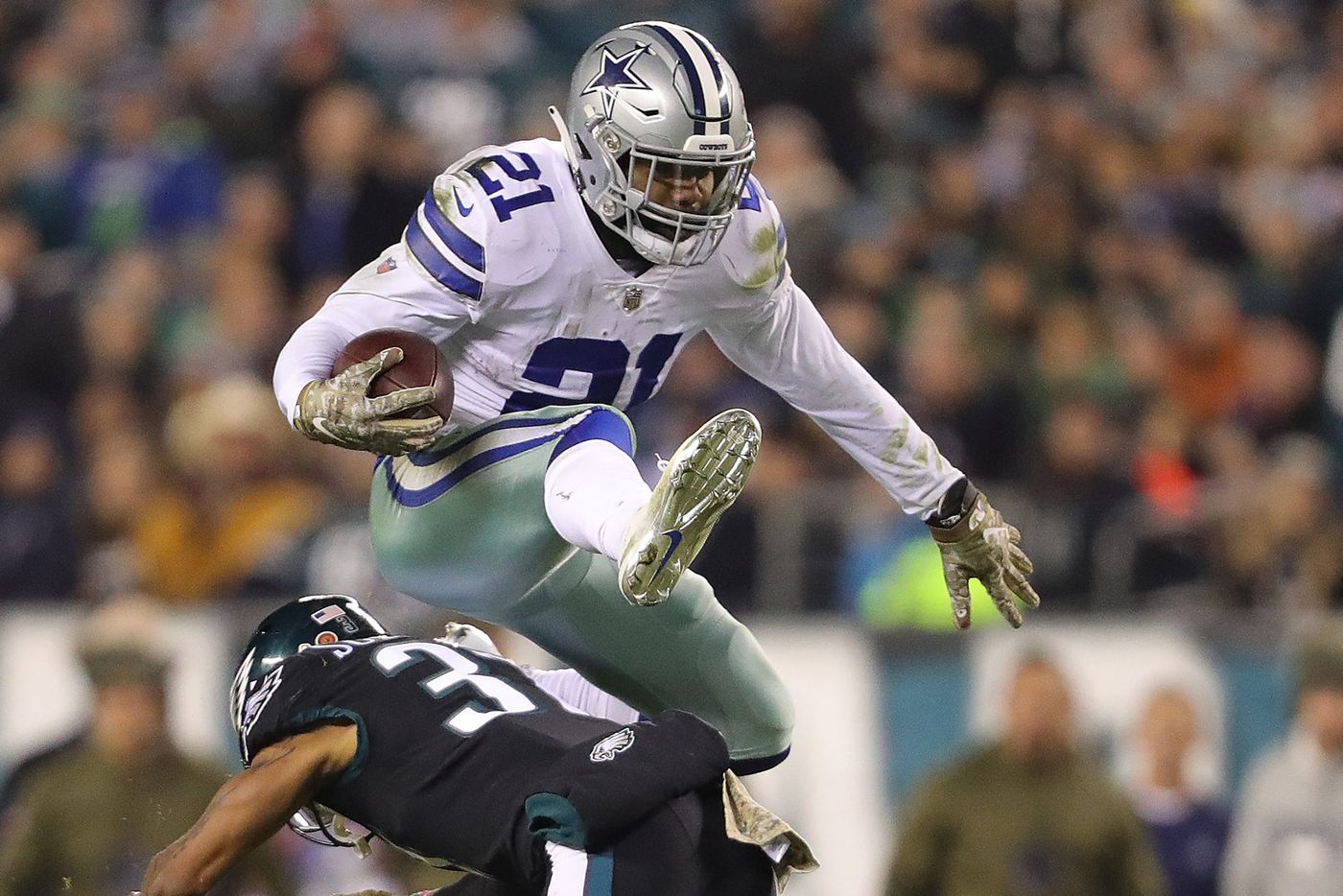 [ad_1]
Ezekiel Elliott projects to have a huge workload versus the Bills on Thanksgiving Day. Photo by KA Sports (Flickr) [CC License].

The only thing better than scarfing down a Thanksgiving Day feast is doing so while watching football. Thankfully, the NFL is rewarding us with a tripleheader on Thursday, and while the games don’t project to be super competitive, there are plenty of prop bets to wager on.

Scrambling for big gains was a Mitchell Trubisky calling card last season and it was one of the main reasons why he was successful. He’d go through his progressions and, if no one was open, he’d tuck the ball and run. In eight of his 14 regular-season starts, he rushed for 20+ yards, and in 11 of 14, he ran for at least 16 yards.

This season, he’s been hesitant to scramble (primarily due to shoulder and hip injuries) but that all changed last week versus the Giants. Trubisky had a season-high seven rushing attempts and he’s been adamant in the media the last two weeks about getting out of the pocket and making more plays on the run. Detroit allows a 105.6 rushing yards per game, and earlier in the season were torched for 54 yards on the ground by Patrick Mahomes.

They say defense doesn’t matter, but what about defensive tendencies? Buffalo has excelled at stopping enemy passing attacks all season, but have been haemorrhaging yards on the ground. They’re surrendering 130.5 rushing yards per game and their run defense is ranked 26th by DVOA. They play seven or fewer defenders in the box on 98% of their snaps according to Sports Info Solutions, which is music to Ezekiel Elliott’s ears.

I don’t see many backs who change direction with the method we see from Ezekiel Elliott and it’s effective. pic.twitter.com/FfWkxIpdES

Zeke is averaging 21.6 carries per game over his last six outings and operates behind Dallas’ top-5 run blocking unit. The Cowboys are a touchdown favorite, so game script is likely to be in his favor, which means he’s going to be fed the football early and often.

Can I interest you in a revenge game narrative? Cole Beasley was critical of the Cowboys offense before he left this past offseason, and now he gets a chance torch his former team on Thanksgiving. He’s not a sexy name to bet on, but he has quietly become one of Josh Allen’s most trusted weapons.

Bills offense is finally on the board after a 18 yard touchdown pass from Josh Allen to Cole Beasley!#GoBills #BUFvsDEN pic.twitter.com/EiB8JIIbir

He has six or more targets in seven of 11 games this season, and with John Brown dealing with a tough matchup on the outside, more passes should funnel Beasley’s way. He runs almost all of his routes from the slot, where Dallas has been hit for a combined 140 yards over the last two games.

This line feels like a mistake giving the amount of volume Cobb has seen over the last month. He has 30 targets over his last four games and four or more catches in each of the those outings. Amari Cooper is likely to draw shadow coverage from Tre’Davious White, which means more opportunity for Cobb when Dallas does take to the air.

Randall Cobb reeled this in ????

If there’s a weakness in the Bills pass defense it’s versus slot receivers, as evident by Jarvis Landy’s nine catch, 97-yard performance in Week 10. Cobb is no longer the talent that Landry is, but he profiles as a similar player and should be able to haul in at least four receptions.

It seems ridiculous to bet against Michael Thomas given the efficiency he’s shown this season. He’s already caught 104 passes in just 11 games and is on pace to set the record for most receptions in a season.

You can’t guard him, you can only hope to contain him.@CantGuardMike | #SAINTS pic.twitter.com/of4yJ19ROK

He has catch totals of 10, 8, 13, 11, 9, 8, 11 and 9 over his last eight games, but nearly all of those contests were either close wins or a blowout loss. The Saints matchup versus the Falcons is not expected to be close, which could cut into Thomas’ volume if the game stays on script. Hauling in 10 receptions should be a rare feat and you have to think Atlanta will sell out to stop him given the fact that he lit them up for 13 catches and 152 yards three weeks ago.

Also working in our favor is the relatively low juice on the under at BetOnline. Most online sportsbooks have the under on this prop at -170 or worse, while BetOnline’s odds are much more favorable.