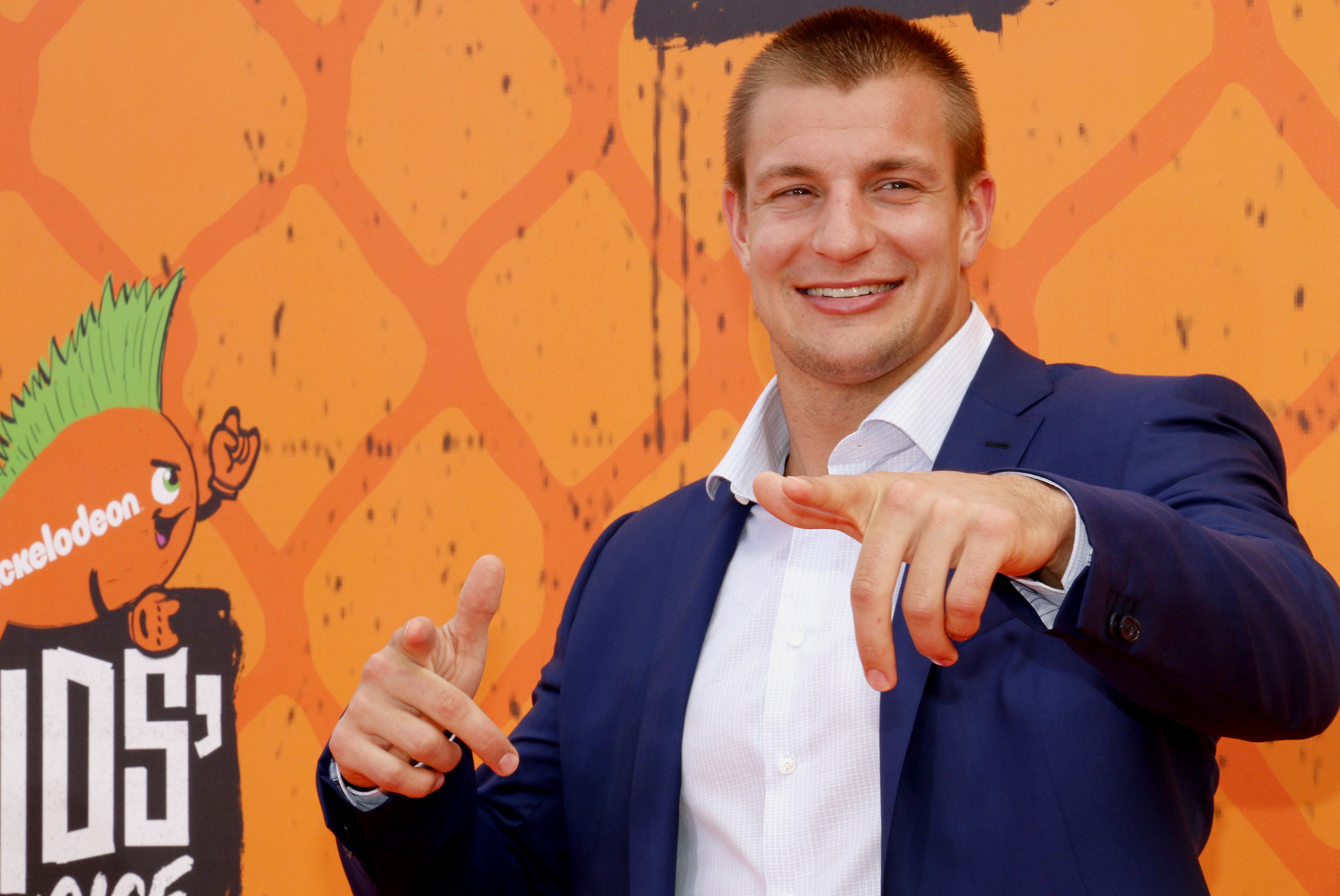 The New England Patriots have restructured tight end Rob Gronkowski's contract to boost his potential 2018 earnings by $4.3 million, according to agent Drew Rosenhaus.

Gronkowski has a base salary of $8 million and can earn up to $1 million in roster bonuses if he is active for all 16 games, with $3.3 million achievable in additional incentives. The new deal has a max value of $13.05 million this year.

The incentives will pay Gronkowski $1.1 million for hitting each of the following benchmarks (maxing out at three benchmarks for $3.3 million): playing 80 percent of the offensive snaps, making at least 70 catches, gaining at least 1,085 receiving yards or scoring at least nine touchdowns. The latter three figures are each exactly one unit more than he had in 2017 (69 catches, 1,084 yards, eight TDs).

The restructure marks the second consecutive year in which the Patriots have boosted Gronkowski's deal through incentives, and he made an extra $5.5 million last year after garnering his fourth career first-team All-Pro nod. He is scheduled to make $9 million in base salary and $1 million in roster and workout bonuses in 2019, the final year of his contract.

–A day after becoming the highest-paid player in NFL history for the second time in his career, Green Bay Packers quarterback Aaron Rodgers said he explored the possibility of a uniquely structured deal before receiving a more traditional contract.

Rodgers was asked on a conference call with reporters if he sought out a deal more like an NBA contract, with compensation tied to a team's salary cap or the use of player options to give the player more leverage. He said he and his agent, David Dunn, discussed various possibilities but found “there wasn't a lot of wiggle room in that area.”

“Those were all definitely talked about, and they were in the discussion,” Rodgers said. “Ultimately, I don't think the NFL is ready for those type of contracts and willing to go in some of those directions. The number of players on the active roster and counting salary cap is definitely a hindrance to some of that stuff.”

–Colin Kaepernick's collusion claim against the NFL will continue after system arbitrator Stephen B. Burbank denied the league's request to dismiss the case.

The ruling means Burbank found sufficient evidence for the case to continue and possibly go to trial. The NFL declined to comment on the decision.

Pro Football Talk reported, citing a source, that further discovery is now expected, giving Kaepernick and Geragos more opportunities to gather information supporting their position. Eventually, the case could lead to a hearing in which owners would be required to testify.

–The Los Angeles Rams created about $7 million of 2018 cap space by restructuring the contracts of left tackle Andrew Whitworth and wide receiver Robert Woods, according to an ESPN report.

The moves raise the Rams' cap space to around $10.1 million, per Spotrac, creating additional room to fit what is expected to be a record-breaking extension for defensive tackle Aaron Donald.

Whitworth, 36, was scheduled to make $8 million in base salary this season, the second year of a three-year, $33.75 million deal. Per Spotrac, he had nearly $7 million of that converted into a signing bonus and prorated over the next two seasons. Woods, 26, had $4.7 million of his $5.5 million base salary for this season converted into a signing bonus, per Spotrac, stretching the cap hit over the next four years.

–Elvis Dumervil announced his retirement from the NFL after 12 seasons in a social media post.

“After spending a great deal of time talking to my family and prayerfully considering what is next in my career,” Dumervil said, “I have made the difficult decision to step away from the NFL at this time. It's been an incredible 12-year run.”

A fourth-round pick out of Louisville selected to the Pro Bowl five times, Dumervil recorded 105.5 career sacks, which ranks 26th on the all-time list since the stat became official in 1982. He led the NFL with 17 sacks in 2009, the first of two first-team All-Pro appearances.

“Many people might wonder what a young African-American kid from Minnesota and a highly decorated Vietnam hero turned United States senator might have in common,” Fitzgerald, 34, said. “Well, I thought of a few. I'm black. He was white. I'm young. He wasn't so young. He lived with physical limitations brought on by war. I'm a professional athlete.He ran for president. I run out of bounds. He was the epitome of toughness, and I do everything I can to avoid contact. I have flowing locks, and, well, he didn't.”

Fitzgerald was one of four speakers to offer eulogies at a memorial service in Phoenix for McCain, who died of brain cancer last Saturday at 81. Fitzgerald spoke immediately before former Vice President Joe Biden, who became one of McCain's closest friends when they served together in the U.S. Senate.

–Indianapolis Colts rookie defensive end Tyquan Lewis is expected to miss the first nine weeks of the season with a foot injury, according to the Indianapolis Star.

Coach Frank Reich addressed the situation earlier this week but didn't have a timetable for his return, saying he didn't expect Lewis to have surgery.

The Colts traded up in the 2018 NFL Draft to select Lewis, an Ohio State product, with the final pick of the second round. In his career with the Buckeyes, he had 23.5 sacks and 36.5 tackles.

–The Houston Texans have signed center Greg Mancz to a two-year extension, the team announced.

Figures for the deal were not announced, but Sirius XM NFL reported Mancz will make $3 million per year in 2019 and 2020. He was scheduled to make $1.9 million in 2018 on his restricted free agent tender.

Mancz, 26, has started 23 games over the last two seasons, primarily at center but also at right guard. He is expected to back up starter Nick Martin at the pivot this year, while providing depth behind free agent signees Senio Kelemete and Zach Fulton, who will start at left and right guard, respectively.

–The Tampa Bay Buccaneers waived running back Charles Sims III from injured reserve with an injury settlement, the team announced, making him a free agent.

Sims was placed on IR last Thursday, five days after injuring his knee as he blocked during the opening kickoff of the Bucs' second preseason game.

Sims, who turns 28 next month, re-signed with Tampa Bay on a one-year, $1 million deal this offseason after hitting free agency.

–Minnesota Vikings receiver Cayleb Jones was formally charged with felony theft, misdemeanor domestic assault as well as interfering with a 911 call in a court appearance at Dakota County Court in Hastings, Minn.

Jones was arrested Tuesday, the day of the alleged incident. Bail was set Thursday at $5,000 without conditions and $1,000 with conditions by judge Richelle M. Wahi. Jones' next court date is slated for Oct. 4.

According to a police report, the incident occurred on Tuesday night at a hotel in Eagan, Minn. A woman identifying herself as Jones' girlfriend called 911 and told authorities Jones put his hands on her. She told police he picked her up and threw her down, before later kicking her and stealing her phone as she called for help.

–The Dallas Cowboys agreed to trade undrafted rookie cornerback Charvarius Ward to the Kansas City Chiefs, according to an ESPN report.

Per ESPN, the deal is expected to be finalized Friday.

Ward was not picked out of Middle Tennessee State in April's draft and signed with Dallas. He has seven tackles and two passes defensed in two appearances this preseason after posting 10 passes defensed in his final year with the Blue Raiders.