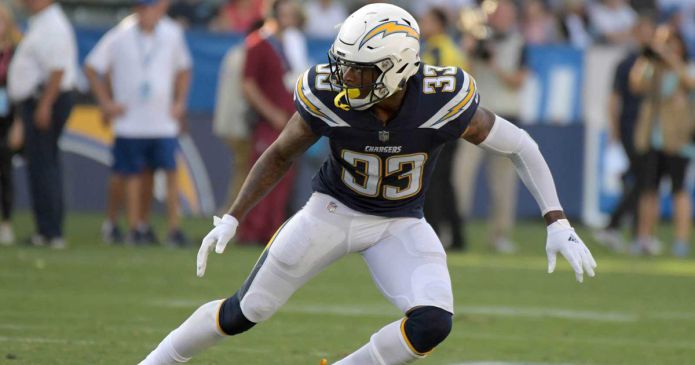 Two unlikely candidates have emerged as favorites to win 2018 NFL Defensive Player of the Year.

With ten of the past 11 winners being drafted in the top 15 overall, Chargers’ safety Derwin James (17th overall) and Colts ILB Darius Leonard (36th overall) had much longer odds this offseason.

Bovada Odds to Win 2018 NFL Defensive Rookie of the Year

*Follow the link in the table to see all betting options

Will the Chargers Have Their 2nd DROY in 3 Years?

Chargers’ management seems to have an eye for defensive talent as it was only 2016 when Joey Bosa took home DROY honors. Now James finds himself as the favorite to win the award this year.

James has immense talent, but to win the award he’ll have to break a streak that dates back to 1990 as the last time a safety has won.

We’ve been high on Derwin James for a while, liking his chances at the award back in August, and myself again picking him as a best bet near the end of this article as well.

#Chargers rookie Safety Derwin James has a sack or an INT in each game this season. 4 in a row.pic.twitter.com/tUuLNTyGrT

James has been involved in an impactful play each game so far, with three sacks and one interception. Of any rookie who has recorded an INT so far, he is the only one to also be wreaking havoc in the opponent’s backfield in the sack department as well.

James ranks seventh among rookies in tackles with 26

With 26 combined tackles he ranks seventh in rookie tackling, as well. Impressive as that may be, this is where Leonard has him beat by a large margin.

Leonard has reeled off double-digit tackles each of the past three weeks. His 54 combined tackles place him not only first among rookies, but a whole eight tackles above the next closest player in the entire NFL.

Darius Leonard leads the #NFL in tackles with 54, which is the most through the first 4 weeks since 2005 pic.twitter.com/2WegriXHbg

On a Colts defense that was supposed to be devoid of impact players, the second-round pick from South Carolina State has emerged as an early star. The first month of his NFL career impressed enough to win him NFL Defensive Rookie of the Month honors for September.

Leonard has recorded a sack in each of the past three games and his four total sacks lead all rookies and ties him for sixth overall in the league.

History favors the ILB position a bit more, with Luke Kuechly being the last at the position to win DROY in 2012.

But Leonard’s stats through four games blow Kuechly’s out of the water through a similar timeframe. Kuechly recorded only 25 combined tackles without any sacks in Weeks 1-4 in his rookie season. By that comparison Leonard almost looks to be easy money if his current pace continues.

Who’s the Best Bet for DROY?

I liked James for DROY back when his odds were +1400, so now that he’s impressed enough to be favored, I don’t see much reason to change my opinion. That being said I certainly wouldn’t talk you out of a bet on Leonard as the league’s top tackler.

Derwin James has been the NFL's highest graded rookie safety by a comfortable distance so far this season. pic.twitter.com/VoxqM2yf5a

But the season is young and anything can still happen, including injuries. Leonard left last week’s game in a walking boot and is questionable for Week 5 with an ankle injury. For that reason I want to throw out another little talked about player when it comes to DROY betting.

Linebacker Fred Warner of the 49er’s has been equally impressive as any rookie so far. The third-round pick from BYU has 43 combined tackles which is second in rookie tackles and third overall. A bet on Warner is still paying +4000 at Bovada.