FC Porto's star midfielder Sergio Oliveira will be aiming to help his team capitalize on their slender one-point lead at the top of the Primeira Liga and beat rivals Benfica to the title. Photo By @FCPorto (Twitter)

With just ten games left in the Primeira Liga season, it’s entering its final stretch with two contenders – Porto and Benfica – battling it out for the trophy. Porto currently leads with 60 points and is favored at -125, while Benfica, in second, has 59 points and is pitched at +100.

We’ll take a look at their form, their respective run-ins and try and identify where the value is.

It’s a two-horse race for the Primeira Liga title as FC Porto and Benfica prepare themselves for what is effectively a ten-game mini-league. With only a single point separating them and a very similar record in terms of wins and goal difference, the finest of margins look likely to decide this one.

It could hardly be tighter at the top but of particular significance right now is the column on the right (above ). While Porto are displaying the kind of form you would expect from a team going for the title -13 points out of the last 15 available – Benfica is in the midst of a dip, having picked up only five points from their last five games.

In other words, rewind the clock five games and Benfica were sitting at the top of the table with a more-than-comfortable seven-point lead. At that stage, they, and not Porto. would have been odds-on for the title, so things can change and can change very quickly. It’s all about momentum and, currently, it’s all with the Dragões.

Tough Looking Visit to Famalicão up Next for Porto

The key questions are can Porto carry this momentum into the final ten games and how does their run-on compare to Benfica’s?  Well, next up for the Blue and Whites is a tricky-looking away game at seventh-placed Famalicão but if they can emerge from that one with at least a point, they then have a run of six games against teams from the bottom half of the table. 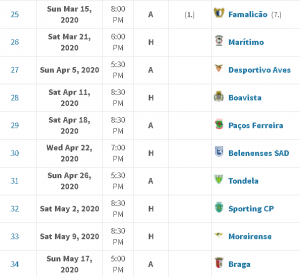 On paper, they could pick up close to maximum points from this six-game run, but games against teams who are fighting relegation are notoriously difficult in the run-in, and particularly their away game at 16th-placed Paços de Ferreira. Before then, they play bottom-of-the-table Desportivo Aves but they’ve only won four games and should present less of a problem than a fired-up Paços de Ferreira.

But, Porto will need to not slip up in this six-game spell because they finish the season with games against teams currently in fourth, eighth and third – the final game being a daunting away trip to Sporting Braga.

With only a single point separating  Porto and Benfica and a similar record in terms of wins and goal difference, the finest of margins will decide this one.

The Next Two Absolutely Vital for Benfica

For Benfica, it’s a slightly tougher run-in but begins with two eminently winnable games that offer them a perfect opportunity to end their poor run of form.  In many ways, these two games – against Tondela and Portimonense – are must-win matches if As Águias are serious about winning the title. Especially so, as the third game of their final ten is a very challenging away trip to fifth-placed Rio Ave, who are still well and truly in the hunt for a Europa League place for next season. This visit to Vila do Conde could well prove pivotal for Benfica. 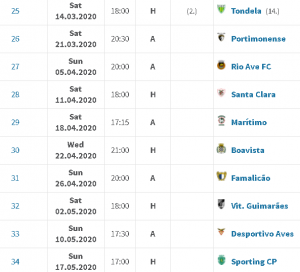 Games against sixth-placed Vitória de Guimarães and seventh-placed FC Famalicão are slightly further down the track for Benfica, and, like Rio Ave, both have Europa League ambitions, making them dangerous opponents. Sprinkled among these tough-looking games, are several against mid-table opponents – like Santa Clara and Boavista – who are both too far adrift of the top six to win a European place and also free of any relegation worries. These are games Benfica should win.

Narrow Margins May Take It to the Final Day

Overall, Benfica has an even split of games against top-half and bottom-half opponents, whereas Porto has four against top and six against bottom; a split that, in theory, favors Porto.

So, much of it boils down to how quickly Benfica can rediscover their form of two months ago, and I happen to think their next two games offer them that chance. If they deliver, as I expect them to, I can see them regaining the initiative in the race and edging the title by a narrow margin, maybe even one that’s decided on the final day.

Pick: Benfica to win the Primeira Liga (Even)

Once just a sports fanatic, fan-turned-writer Gary Gowers has been featured on European television and radio networks to discuss several professional football clubs. His work can be found in an assortment of publications like The Metro, MyFootballWriter.com, and BBC Radio Norfolk.

Once just a sports fanatic, fan-turned-writer Gary Gowers has been featured on European television and radio networks to discuss several professional football clubs. His work can be found in an assortment of publications like The Metro, MyFootballWriter.com, and BBC Radio Norfolk.