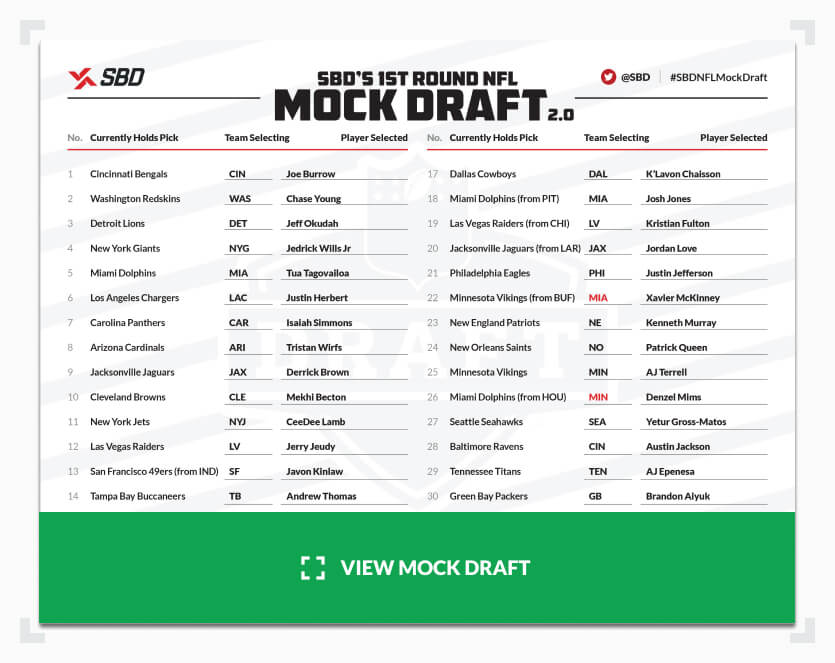 See how the sportsbooks believe the first-round of the 2020 NFL Draft will play out.

Earlier in April, we released our first 2020 NFL mock draft. Not wanting to be like everyone else, we based it strictly off betting odds, removing personal opinion and click-bait material.

Now 11 days later, we’ve seen certain player’s stock rising/falling at sportsbooks. Here’s how it has affected how the first round is expected to play out.

The following props were considered in this mock:

Giants Take Wills Over Simmons at No. 4

The odds of the Giants taking an offensive lineman with their first pick are listed at -455. Linebacker is the second-favorite, but carries odds of +350.

Jedrick Wills did this pic.twitter.com/mya1PkZzE2

Wills has even become the +105 favorite to be the Giants first pick, and is listed at -120 to be the first offensive lineman off the board.

As a result, Simmons takes a tumble down the board to Carolina at sixth-overall, who are listed at -286 to take a defensive player with their first pick.

From @NFLTotalAccess: #Clemson‘s Isaiah Simmons is one of the most interesting prospects, and I've been surprised how many teams view him as a safety. Other teams think he's a Will LB… or edge rusher? pic.twitter.com/N9esw6BfJn

We originally had the Panthers taking Auburn DT Derrick Brown. But with Simmons’ draft position over/under set at 6.5 (with the under being favored), and Brown’s still being 8.5, we couldn’t let the former Tiger fall any further.

Despite reports of some teams removing Tua Tagovailoa from their draft boards, the odds still favor him being the second quarterback taken, as well as remaining a top five pick.

One of Tua Tagovailoa’s best throws at Alabama. pic.twitter.com/bVMcmHSL5J

Justin Herbert has closed the gap, and is even favored to be taken ahead of the Bama QB at some books. But the majority still favor Tua.

The Dolphins currently hold the 5th, 18th, and 26th overall picks in the 2020 NFL Draft. We only have them using two of those picks, but picking up the 22nd and 32nd as well.

The odds say Xavier McKinney will be the first safety off the board, and is expected to be taken earlier than the 26th pick. The Dolphins certainly are in need of a safety and are clearly willing to invest in their secondary after making Byron Jones the highest paid corner in NFL history.

Xavier McKinney is truly a jack of all trades.

Pursuit of an edge rusher

Coverage of an elite DB

Some lucky NFL team is getting a very versatile football player for their defense. X is currently 6'0, 201 pounds. #BuiltByBama @mckinney15__ pic.twitter.com/6gTnCK5sWg

The Dolphins aren’t done there, though. With the odds favoring D’Andre Swift being a first-round pick, we had to find someone to come up and get him – KC would make sense, but the odds heavily favor the Super Bowl champs taking a defensive player with their first pick, specifically a corner.

In spite of adding Jordan Howard, the Dolphins are still pretty RB-needy. And even after giving up the previous mid-round picks, they still have more resources available to turn their 39th pick into the 32nd. It would likely take their fourth-round pick in the 2021 NFL Draft, and potentially their other fifth (153) from this year.

After receiving a bachelor's degree in communications from the University of Ottawa ('15), Matt spent two years with Rogers TV as a host, producer, and play-by-play commentator. He has been with us since 2016 and serves as SBD's Editor-in-Chief and sports betting expert.

After receiving a bachelor's degree in communications from the University of Ottawa ('15), Matt spent two years with Rogers TV as a host, producer, and play-by-play commentator. He has been with us since 2016 and serves as SBD's Editor-in-Chief and sports betting expert.