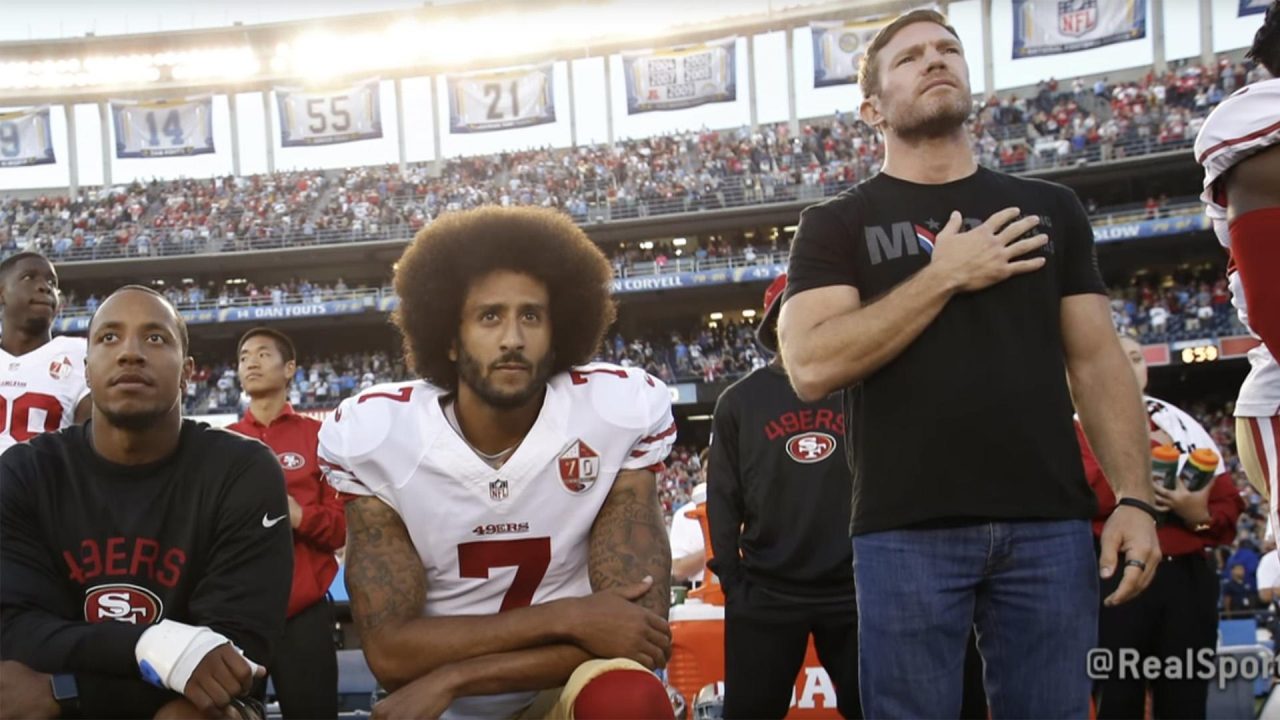 Nike has unveiled its first “Just Do It” ad narrated by Colin Kaepernick, a spot scheduled to air during the NFL season opener Thursday night as well as during the U.S. Open tennis tournament and other major sporting events.

The two-minute spot released Wednesday highlights superstar athletes LeBron James, Serena Williams and others, and touches on the controversy of NFL players protesting racial inequality, police brutality and other issues by demonstrating during the national anthem.

Kaepernick narrates the full spot but first physically appears midway through. As a camera pans to reveal Kaepernick's face, a reflection of a United States flag is visible on the facade of a building behind him.

Kaepernick says: “Believe in something, even if it means sacrificing everything.”

At the start of the ad, Kaepernick says: “If people say your dreams are crazy, if they laugh at what you think you can do, good. Stay that way, because what nonbelievers fail to understand is that calling a dream crazy is not an insult, it's a compliment.”

The former 49ers quarterback is revealed as the narrator toward the end of the spot.

The commercial's universal theme is about athletes pushing for bigger dreams. It features young athletes who compete amid various challenges, touching on issues of gender, disabilities and weight loss, among others.

Kaepernick says at the end: “Don't ask if your dreams are crazy. Ask if they are crazy enough.”

The spot is expected to air this week during college football and MLB games, and stream on various music, gaming and other platforms, Nike spokeswoman Sandra Carreon-John said.

Kaepernick hasn't spoken to the media publicly since opting out of his contract with San Francisco and becoming a free agent in 2017. He scored a legal victory last week in his grievance against the NFL and its 32 teams when an arbitrator allowed his case to continue to trial. The quarterback claims NFL team owners conspired to keep him out of the league because of his protests. His case hinges on whether owners worked together rather than decided individually to not sign Kaepernick.

A similar grievance is still pending by former San Francisco teammate Eric Reid, a Pro Bowl safety who joined in the protests.

Kaepernick already had a deal with Nike that was set to expire, but it was renegotiated into a multiyear agreement to make him one of the faces of Nike's 30th anniversary “Just Do It” campaign, according to a person familiar with the situation who spoke on condition of anonymity because details of the detail had not been revealed publicly.

Nike also will create an apparel line for Kaepernick, including a signature shoe, and contribute to his Know Your Rights charity, the person said. The deal puts Kaepernick in the top bracket of NFL players with Nike.

The endorsement deal between Nike and Kaepernick prompted a flood of debate Tuesday. It was a trending topic on Twitter and other social networks, with some fans urging a boycott of the company's clothes and sneakers — even burning and cutting out the signature swoosh logos on their gear.

Nike also provides all NFL teams with game day uniforms and sideline apparel, a partnership that was extended in March to run through 2028.

President Donald Trump, a frequent critic of protesting NFL players, tweeted Wednesday that Nike is getting “killed” over the endorsement deal.

“Nike is getting absolutely killed with anger and boycotts,” Trump tweeted. “I wonder if they had any idea that it would be this way? As far as the NFL is concerned, I just find it hard to watch, and always will, until they stand for the FLAG!”

The College of the Ozarks, a private Christian school in Point Lookout, Missouri, that competes in sports at the NAIA level, said it will remove all uniforms purchased from Nike that contain the brand's logo.

Last year, the college added a stipulation to competition contracts, saying it would walk away from any game where the opposing team takes a knee, sits or turns its back on the flag or anthem.

“If Nike is ashamed of America, we are ashamed of them,” College of the Ozarks President Jerry C. Davis said in a statement. “We also believe that those who know what sacrifice is all about are more likely to be wearing a military uniform than an athletic uniform,”