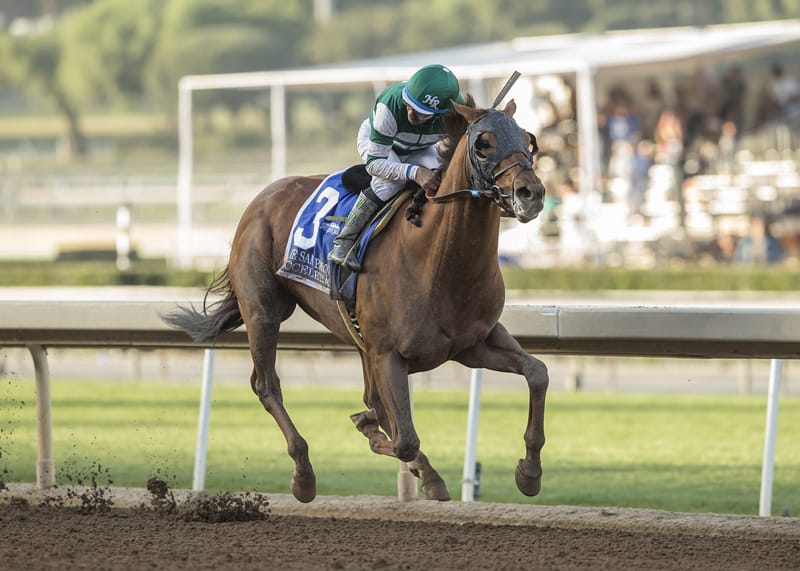 With just under a month to go until the $6-million Breeders’ Cup Classic (G1), the major preps have been decided and the John Sadler-trained Accelerate has seen his price drop and there is not much doubt the five-year-old will be sent off as the betting favorite on Nov. 3.

On Sept. 23, five days before his final tune-up for the year-end championship event, he was listed at +400 in early Breeders’ Cup Classic betting odds at Bovada. After his victory in the Awesome Again (G1) at Santa Anita on Sept. 28, his betting odds have drifted downward to +275.

In his previous start, he won the Pacific Classic (G1) at Del Mar by 12 ¼ lengths and earned a 115 Beyer Speed Figure. His number dropped to a 100 for his last win where he was 2 ¼ lengths ahead of runner-up West Coast, who was returning off a six-month layoff for Hall of Fame trainer Bob Baffert.

West Coast is the fourth choice in future Classic betting at Bovada at +700.

The three-year-old McKinzie is the second choice in early Classic wagering at Bovada at +500. The colt won the Pennsylvania Derby (G1) off a six-month layoff in his last outing for Baffert.

MCKINZIE’S LONE LOSS DUE TO DQ

The colt has won four of his five career starts, his lone loss coming in the San Felipe (G2) where he crossed the wire first but was disqualified to second for interference in the stretch.

He was the beneficiary of the disqualification in the Los Alamitos Futurity (G1) last December where he was second by a half-length to Solomini but placed first.

The duo gives Baffert a strong one-two punch as he looks for his fourth Classic win in the last five years. He won three in a row from 2014 to 2016 with Bayern, American Pharoah and Arrogate.

The three-year-old Catholic Boy is the third choice in early Classic betting at +600. Trained by Jonathan Thomas, the ridgling is a Grade 1 winner on turf and dirt this year.

He won the Belmont Derby (G1) on turf at 1 ¼ miles on July 7 and returned to the main track in his last start where he won the Travers (G1) at Saratoga, also at the Classic distance of 1 ¼ miles.

The Bill Mott-trained Yoshida made his first career start on dirt a winning one, taking the Woodward (G1) at Saratoga on Sept. 1, and is now listed at +1000 in Classic betting at Bovada. He won the Old Forester Turf Classic (G1) earlier this year at Churchill Downs.

An intriguing addition to the Classic field if he makes the trip across the pond would be Roaring Lion, who is listed at +1000. The colt has won three in a row, taking the Irish Champion Stakes (G1) on turf at Leopardstown in his last outing.

Others that have done most of their best running overseas that likely will start in the Classic include Thunder Snow (+1200), Mendelssohn (+1200) and Gronkowski (+2000).

Diversify, after getting dueled into defeat in the Jockey Club Gold Cup (G1) where he tired to finish fifth, has seen his odds drift up from +800 to +1400.

The Breeders’ Cup Classic will be contested at Churchill Downs on Saturday, Nov. 3, one of 14 championship races over two days of action.

Handicapper Michael Dempsey will be covering the Road to the Breeders’ Cup for OddsShark and his full card reports with selections, analysis, fair odds line and wagering recommendations for major tracks can be found daily at turfnsport.com.