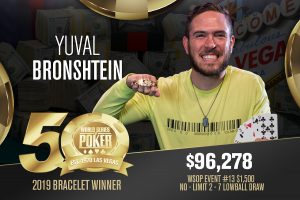 Yuval Bronshtein, a player from Tel Aviv, Israel, topped last night the record-breaking field of the WSOP $1,500 No-Limit 2-7 Lowball Draw to claim his first gold bracelet and a first-place prize of $96,278. This year’s edition of the $1,500 buy-in event drew 296 entrants, who generated a prize pool of nearly $400,000.

Despite his eventual victory, Bronshtein did not have a smooth ride throughout the final stages of the tournament. The player was running for his tournament life early into the final day of action, but all the challenges he faced were well worth it.

Action kicked off on Thursday with Ajay Chabra holding the majority of chips in play. The player maintained his lead and his momentum down to the heads-up match against the eventual champion. As for Bronshtein, he was the second shortest stack at the start of the tournament’s final day.

The eventual winner artfully avoided elimination to build his momentum and confidence. His initial difficulties did not discourage him to look for ways to improve his situation and claim the title. He told WSOP staff after his triumph that over the course of his poker career, he has seen “people come back and win tournaments from a short stack.” The player went on to say that making a big comeback really makes the victory a bit more fun. 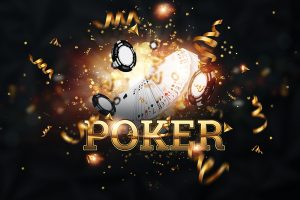 As mentioned earlier, Chabra kicked off the final day of the 2-7 Lowbll Draw tournament with a massive chip stack. The player was running for his first gold bracelet from the series. In his pursuit of the shiny gold piece, Chabra dominated action at the final table down to its final two players – him and Bronshtein.

The two-handed play began with Chabra being well ahead of his final opponent. The player was literally on fire, extending his advantage and making what he thought were steady steps toward the title. That was until Bronshtein won an all-in confrontation that could have cost him his run in the record-breaking event.

From that point on, Bronshtein began building his stack and putting more and more pressure on Chabra until the latter finally succumbed and busted in second place for a $59,491 payout.

Of his choice to participate namely in a 2-7 Lowball Draw poker tournament, Bronshtein told WSOP staff that “this is considered to be the purest form of poker” and that the game is “really about reading people.”

The Israeli player also told interviewers that he has had a rough year, but “the bad things that have happened to me have made me stronger and I’m really happy.”

This was Bronshtein’s 52nd in-the-money finish in a WSOP event. The player has amassed more than $1.17 million in earnings from WSOP events over the years. And as mentioned above, his victory in this year’s $1,500 No-Limit 2-7 Lowball Draw secured him with his first gold bracelet from the world’s longest-running tournament poker series.