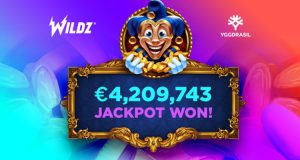 Today has brought a host of good news about players landing big jackpots on some of the most popular progressive jackpot slots out there.

After we covered happily Microgaming’s announcement that a lucky River Belle Casino has hit a €7.7 million jackpot win on Atlantean Treasures: Mega Moolah, it is now time to inform our readers about another big win.

Empire Fortune was released in the fall of 2016 and quickly claimed a spot among the most popular titles delivered by Yggdrasil, the major provider of online casino content and related software for the iGaming industry.

Empire Fortune shares a global progressive jackpot pool with another hit Yggdrasil title – Joker Millions. The two games together have paid out a handful of big progressive jackpots over the past several years. Including the latest win, Empire Fortune and Joker Millions have collectively awarded more than €39.5 million in jackpot prizes of various sizes.

A Little More about Empire Fortune

As mentioned earlier, Empire Fortune joined Yggdrasil’s library in 2016. The game features a standard 5-reel, 3-row grid layout and 20 paylines. The game is available in a number of languages, across all devices and browsers.

Empire Fortune offers players a look into a world of riches. Aside from the engaging gameplay, the overall experience is boosted by an epic accompanying soundtrack.

The slot’s base game is packed with captivating features. Symbols landing on the reels can trigger a Free Spin mode. A Hold feature offers players the chance to carry over two Bonus or Free Spins symbols into the next spin for another chance at getting the coveted third Bonus symbol that summons the Jackpot Wheel for a chance at a multi-million jackpot.

Of the latest big win on an Yggdrasil-produced slot, Fredrik Elmqvist, CEO of the iGaming provider, said that they are excited to see another big jackpot drop on Empire Fortune.

Mr. Elmqvist went on to say that this latest win demonstrates the huge success of their progressive jackpot games since they were first launched as they attract a big customer base of players “looking to land that big win while also enjoying a great casino experience.”

Tony Kjäldström, COO of Wildz’ parent company Rootz Ltd., commented that jackpot titles are proving extremely popular and attract many players to their side, and that they are delighted to see that one of their customers has hit such a “life-changing sum of money.”

Mr. Kjäldström also pointed out that this is the biggest ever jackpot to be won by a Wildz player since the casino was launched last year.