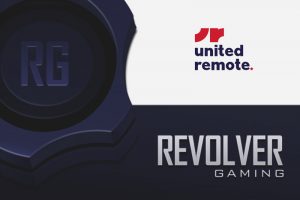 The company announced earlier this week that it has teamed up with Revolver Gaming.

Under the terms of the deal between the aggregator and the supplier, Revolver Gaming will integrate its entire games portfolio with United Remote and the latter will distribute its new partner’s gaming titles across its network of clients.

Revolver’s gaming portfolio currently includes thirteen titles, with Space Traders, Multiplier Man, and Goodfishes being among those. Its games are widely regarded for offering “sharp visuals and thrilling features” to slots enthusiasts. The games maker has launched just recently its new slot Dragon Spins, which takes players to the Far East and invites them on an adventure that can eventually earn them an emperor’s ransom.

Aside from its existing content, Revolver Gaming will also integrate its future game releases onto United Remote as part of the recently signed distribution agreement between the iGaming content creator and the aggregator.

Commenting on their partnership with Revolver Gaming, United Remote CEO Jeremy Fall said that their ethos is closely related to “the modern, pioneering and innovative spirit at Revolver Gaming” and that this makes this new tie-up “particularly pleasing.”

Mr. Fall went on to say that they strive to provide “highly effective and straightforward solutions” to their partners and that the integration of Revolver Gaming’s portfolio enables them to expand their existing offering with “more high-quality games that are eye-catching, appealing, and engaging.”

United Remote has been having quite a busy year, having just emerged from a period of intensive restructuring under Mr. Fall’s stewardship. The process has resulted in major technology investments, enhanced performance of the company’s iGaming platform, adapting existing agreements, de-risking the entire enterprise, and focusing particularly on player protection.

And late last month, the content aggregator teamed up with Spanish iGaming content maker and supplier Red Rake Gaming. Both providers boast rich and exciting gaming libraries that can now be accessed by United Remote’s clients.