Trump Plaza Could Finally Get Demolished After Multiple Delays 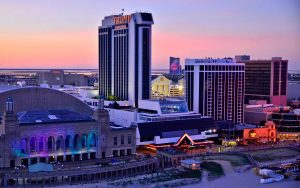 Atlantic City Mayor Marty Small said this week that tearing down the shuttered Trump Plaza Hotel & Casino would be one of his and his administration’s main goals for 2020.

The city’s new top official delivered his unofficial State of the City address during the annual winter luncheon of the Metropolitan Business and Citizens Association, which took place at Caesars Atlantic City this past Thursday.

Trump Plaza was once owned by US President Donald Trump. The property closed doors in September 2014. By that time, Mr. Trump had cut ties with Atlantic Cityand had left its casino industry. In October 2014, he filed a lawsuit against the property’s then owners to have his name removed from the vacant building. His business eventually kept a small stake in the property in return for the use of his name, but that one has since been extinguished.

Trump Plaza is currently owned by New York billionaire businessman Carl Icahn. The former hotel and casino complex was considered for demolition for nearly three years, but the process has been delayed since then.

Mayor Small said this week that his administration’s goal is to “tear Trump Plaza down” and that the vacant property’s demolition being delayed for years would “not be accepted in any other city but Atlantic City.”

The official went on that this was “an embarrassment, it’s blight on our skyline, and that’s the biggest eyesore in town.”

It was in the fall of 2017 when it first emerged that Trump Plaza would be razed to create room for new development on the Atlantic City Boardwalk. The property was planned to be imploded in the spring of 2018.

At the time, Mr. Icahn approached the New Jersey Casino Reinvestment Development Authority with a request to be granted $5.6 million from the Garden State’s alternative investment tax to partially cover demolition costs.

Proceeds from the tax are usually contributed to non-gaming expansion projects and improvements across the state. At the time, money generated from the tax were directed towards cash-strapped Atlantic City which had just witnessed the closure of five of its casinos over two and a half years.

The New Jersey redevelopment agency eventually bowed to the businessman and issued an initial approval to be delivered the requested payment.

As mentioned earlier, Trump Plaza was planned to be demolished in the spring of 2018. However, the implosion was postponed to the fall of that year because Atlantic City was entering its most tourism-heavy months. In addition, local news outlets reported back then that Mr. Icahn was yet to obtain the necessary permit for the demolition of the 39-story building. It seems that no permission has been issued since then.

The other properties that previously operated under the Trump brand now operate under new brands and are managed by new owners. The former Trump Marina now operates as Golden Nugget and is owned by Texas businessman Tilman Fertitta, while the former Trump Taj Mahal was recently renovated and renamed Hard Rock Hotel & Casino Atlantic City.