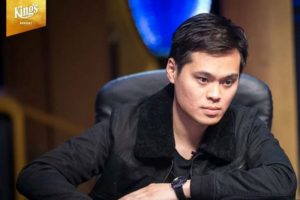 The most expensive WSOP event this year was completed a couple of days ago at King’s Casino Rozvadov, delivering quality poker action and accentuating the thrill of staking a six-figure amount in hopes to claim an even bigger payout.

The WSOP Europe €250,000 Super High Roller drew some of poker’s heavyweights as well as amateur poker aficionados who locked horns in a battle to win a gold bracelet from the major poker series and a hefty payout.

The high roller tournament, which took place between October 16-18, drew 30 entries, including eight re-entries. The event’s field generated a prize pool of €7.125 million. The money was split into payouts for the top five finishers. Each of the five final survivors was guaranteed a minimum cash of €538,722. However, eyes were set on the first-place prize of €2,844,215.

That prize, accompanied by a coveted gold bracelet, eventually went to Taiwan’s James Chen. The player, a cash game specialist who transitioned to tournament poker a few years ago, went through many ups and downs over the three days of the tournament to eventually remain the last man standing and claim the prize and his first WSOP gold bracelet.

A gold piece of WSOP jewelry eluded Chen this past summer. The player finished runner-up to UK’s Stephen Chidwick in the $25,000 Pot-Limit Omaha High Roller in Vegas to collect just over $1 million, while the Brit took home his first-ever piece of WSOP paraphernalia and $1.6 million in prize money.

That $1 million prize was Chen’s largest ever live tournament cash. Until Friday night when the player took down the €250,000 buy-in event.

As mentioned above, the tournament attracted 30 entries. By the start of the third and final day of play, the field was whittled down to the final seven players. Chen was the short stack at the start of Day 3.

The player quickly gained momentum as action unfolded and built a solid stack. However, he lost most of his chips shortly after the money bubble burst to put his run in the tournament at great risk. The player clashed into German poker star Christoph Vogelsang to go down to just a few big blinds. He then won another two flips to get himself back in the race for the hefty first-place prize and the gold bracelet.

Following the bubble burst, many double ups occurred and the chip lead switched hands on a number of occasions. US poker pro Cary Katz was the first player to leave the tournament with a payout. The player went out in fifth place, good for €538,722.

It was Malaysia’s Chin Wei Lim whom Chen had to face in a heads-up duel. The match began with Chen holding a massive chip advantage over his final opponent. However, Lim managed to catch up and even claimed the chip lead at some point.

Chips swung back and forth between the two players until Chen pulled out front again and never looked back.

On what turned out to be the final hand of the tournament, Chen shoved all in pre-flop with [Ad][4d] and Lim called quickly with [Ah][5c] to see the board run out [Ac][Jh][9s][3d][4c]. Rivering two pair, Chen eliminated his opponent and claimed the title. Lim collected €1,757,857 as a consolation prize for his runner-up finish.

Of his victory and his style, which was quite aggressive most of the time, Chen said that “it is mostly how I play” and that “it’s definitely nice to win a bracelet, it is a big reason why I am here.”