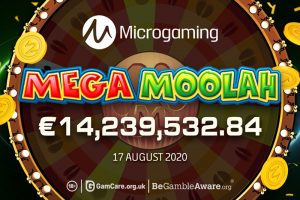 Another player has hit an eight-figure jackpot on Microgaming’s smash-hit Mega Moolah to become the eighth millionaire so far this year to have been made on the software provider’s record-breaking progressive jackpot network.

On Monday, August 17, a player from Sweden triggered a whopping €14,239,539.84 prize while playing Mega Moolah at LuckyCasino.

This has been the largest ever jackpot hit at that particular online casino since its inception. LuckyCasino was launched in 2015 and was then relaunched in 2018 after it was purchased by online gambling group Glitnor. It was one of the first online casinos to adopt Trustly’s Pay N Play product that enables players to start playing right away with a single quick deposit from their bank accounts.

As it is with all jackpot wins on Microgaming’s progressive jackpot network, this one will too be paid out in a lump sum.

The recent €14.2 million jackpot has been the largest one landed on Mega Moolah so far this year. In April, a Jackpot City player hit a €10.7 million jackpot on the popular progressive slot to join Microgaming’s elite club of big winners.

And as mentioned earlier, this has been the eighth jackpot win of over €1 million scored on the provider’s progressive jackpot network so far in 2020.

Commenting on the recent big win, Martin Sidenvall, Casino Director at LuckyCasino, said that it was a historic moment for them to be able to call their winner and announced that “the third largest euro jackpot win ever in Mega Moolah has gone to one of our customers in Sweden.”

Microgaming Director of Games Andrew Booth extended his congratulations to LuckyCasino and their player “on the tremendous win.” Mr. Booth also noted that this recent win marks the largest euro jackpot to have ever been hit in Sweden through Microgaming’s progressive jackpot network.

News about the latest massive win on Mega Moolah emerge just as Microgaming is gearing up preparations for the launch of more slots that are set to join the hugely popular Mega Moolah games universe. The likes of Fortunium Gold: Mega Moolah from Stormcraft Studios and Juicy Joker: Mega Moolah from Just For The Win are slated to be rolled out by the end of the year and go live with multiple iGaming brands.

Microgaming is also set to expand its progressive jackpot network with the addition of upcoming releases Book of Atem: WowPot from All41 Studios, Sisters of Oz: WowPot from Triple Edge Studios as well as African Legends from Slingshot Studios.