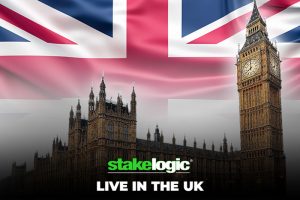 Online slots creator Stakelogic today announced that it is ramping up preparations to enter the UK online gambling market after being given the go-ahead by the nation’s gambling regulator.

Stakelogic will be able to launch its full library of classic and modern video slots after obtaining a supplier license from the UK Gambling Commission.

Players in the UK will thus be provided with access to the content studio’s numerous titles, including Encharmed, Book of Adventure, and new Christmas-themed release Mystical Santa Megaways, the second Megaways game in Stakelogic’s suite.

To celebrate its upcoming launch in the UK, Stakelogic has developed a set of online versions of popular land-based slot games by Reflex Gaming, including Lucky Mushrooms and Eureka Einstein Moments.

In addition, Stakelogic has also recently penned a licensing agreement with Big Time Gaming, which enabled the slots creator to license the latter’s innovative Megaways mechanic. The first product to be born from that partnership – Black Gold Megaways – was launched not long ago. As mentioned earlier, Stakelogic has recently released its second Megaways title as well.

Now as the slots developer is licensed by the UK Gambling Commission and its content is certified to be distributed across UK-facing online gambling operators, more and more local players will be able to access its titles in the coming weeks and months. Stakelogic has signed a series of supply agreements with major operators in order to cement itself in the UK gambling market.

”Thrilled” to Venture Into the UK Gambling Space

Commenting on the latest milestone in the company’s growth strategy, Stakelogic CEO Stephan van den Oetelaar said that they “are thrilled to have secured a supplier licence from the UK Gambling Commission” and that they have already clinched partnerships with a number of iGaming brands that will launch their slots to UK players very soon.

Stakelogic’s boss went on that in anticipation of the coveted regulatory green light from the UK gambling watchdog, they have created slots that will take Reflex Gaming’s land-based casino hits online and that they believe the titles will prove popular with online slots aficionados.

Mr. Van Den Oetelaar also noted that their brand new Megaways offering will certainly prove a big hit with UK players just as it did with players from other jurisdictions.

The executive projected that Stakelogic will “triple the revenue of our clients again in 2020”, as the company continues to secure licenses in regulated markets and grows its slots portfolio.

News about Stakelogic’s UK debut came just weeks after the company obtained a Class II gaming license by the Romanian National Gambling Office. That license enabled the content supplier to go live in the Romanian online gambling market with its full library of titles.