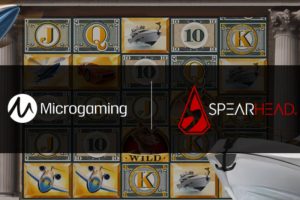 The recent partnership will see Spearhead integrate its portfolio of online slots and table games on Microgaming’s platform. The titles will thus become available to Microgaming’s ever-growing network of clients worldwide.

Spearhead was formed late last year after EveryMatrix purchased GiG Games, the iGaming development studio of online gambling firm Gaming Innovation Group (GiG). GiG offloaded its development arm to pursue growth opportunities in other verticals, while EveryMatrix, by acquiring the studio and its team, was able to venture into the development sector.

Spearhead is based in Marbella, Spain and is licensed and regulated by the Malta Gaming Authority.

Through its partnership with Microgaming, Spearhead will be able to grow its footprint in existing markets and enter new ones by integrating its content to its partner’s widely popular aggregation platform.

Spearhead titles such as Book of Souls and Wilds of Wall Street, among others, are soon set to become available to Microgaming operator partners servicing players from around the world.

Commenting on their partnership with Microgaming, Spearhead Managing Director Mathias Larsson said that they are thrilled to have their games showcased on the Microgaming platform as they know that many online casino clients will get access to the studio’s newly released titles.

Mr. Larsson went on to say that their alliance with Microgaming “contributes tremendously to our objective of delivering content-specific casino games in several regulated European markets.”

Microgaming Director of Global Operations James Buchanan added that they are delighted to welcome the Spearhead team on board and that they look forward to “adding their exciting titles to our content aggregation platform.”

Spearhead recently signed a similar deal with another major online casino content aggregator – ORYX Gaming’s ORYX Hub, which features more than 8,000 titles from a number of gaming studios and suppliers.

Spearhead’s goal is to craft and deliver localized content for local markets. The team behind the young gaming studio aims to create and release 16 games this year, including slots and online versions of popular casino table games.

It should actually be noted that Spearhead launched its first table game in later March. The games creator selected a beloved casino floor classic to make its first foray into crafting table games.

Spearhead’s European Roulette arrived with a sleek design and mobile-first approach. Its smooth user interface is boosted by a realistic 3D roulette wheel and authentic ball behaviors as well as with rapid load time.

The studio’s debut table game title offers two different view settings – standard table view and racetrack view. The former offers all the traditional inside and outside bets as well as a range of special bets and statistics-based bets, while the racetrack view features a series of classic bets and the opportunity for players to save up to ten favorite bets for future use.