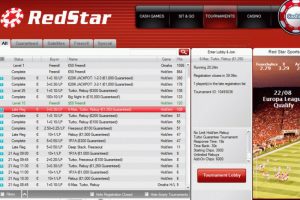 Online poker room Red Star Poker has announced that it will hop onto Playtech’s iPoker network from MPN, following the recent announcement that Microgaming would retire its online poker network.

Red Star Poker was originally launched in 2005. The online poker veteran most notably services a large Russian poker playerbase, but also provides its product to the larger Eastern European marketplace.

Red Star Poker was the first of the 16 MPN skins to announce its plans for the future as Microgaming’s poker network gears up preparations to close shop at some point next year.

News about Red Star Poker’s transition onto the iPoker network first emerged on Monday on the poker operator’s customer support forum. A message in Russian by company representatives read that it took them a while to choose a network as good as their current one and that they are set to begin the “rather time-consuming” integration process in the near future.

Playtech confirmed the news in a statement on its official website published later on Monday. Shimon Akad, COO at the major gambling technology provider, said that “Red Star’s decision to collaborate with us is a testament to our long-term investment in our Poker network and its ongoing development.”

Mr. Akad added that they are “committed to address” the challenges that the poker market is currently facing “head-on.”

More Partnerships in the Pipeline

Playtech revealed that it has more collaborations with online poker operators in the pipeline. This could potentially mean that more MPN skins could join Playtech’s iPoker network ahead of the imminent closure of the former online poker network.

Playtech said that as more poker operators join iPoker, it would increase investment in the product to ensure that it “grows ever stronger.”

While Playtech is looking to grow its online poker network, Microgaming announced earlier this year that it would close its MPN product after more than 16 years of shaping the online poker space.

While the exact day on which MPN will stop existing is yet to be announced, Microgaming said that this would happen in the second or third quarter of 2020.

The Isle of Man-headquartered provider of content and solutions for the gambling industry, said back in September that the decision to shut down MPN came after an extensive internal review of its poker offering, which included input from industry experts, independent consultants, and Microgaming poker staff.

The company noted that it would “adopt a very different strategy and business model” in order to make its poker products “as successful as possible.” Microgaming said that the MPN network was no longer part of that vision.

All poker skins on the network informed Microgaming that would find a new provider, while the company assured them that it would do everything required to make each pending migration “as simple and smooth as possible.”