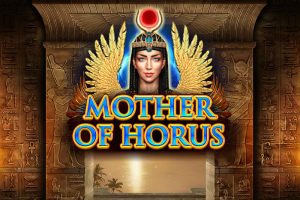 Spanish casino games studio Red Rake Gaming is spiraling players back to the hot sands of ancient Egypt to meet the mighty Isis with its new slot, Mother of Horus.

The newest addition to Red Rake’s ever-growing portfolio features a 5×3 grid with 50 paylines and a special prize bar on top of the reels, which triggers direct wins, free spins, and even a jackpot roulette with three jackpot options.

Action in Mother of Horus takes place against a backdrop of torchlit hieroglyphs and tantalizing soundtrack.

Isis herself, the mother of Horus, is a wild symbol and can act as any other symbol appearing on the reels. During base game, she can land on reels 1, 3, or 5 to unlock coin wins, free spins, or even trigger a jackpot bonus round from the prize bar above the grid. During free spins mode, Isis can land on any reel to create combinations that can award prizes as large as 2,500x a player’s bet.

A mesmerizing Scarab can appear on the reels as a second, nudging wild that moves up and down the reels, bringing more wilds and completing combinations along the lines.

Isis’ appearance on the grid can also trigger the slot game’s Jackpot feature. If Isis unlocks the Jackpot round, a Destiny Roulette appears on the grid. Players are invited to spin the wheel for a chance to win a Minor, Major, or Grand Jackpot. They can gain access to more than one Destiny Roulette throughout their game. Prizes are accumulated and paid out together.

Mother of Horus was released on December 19. The game is certified or awaiting certification from gambling regulators in the UK, Italy, Spain, Portugal, Malta, Sweden, and Romania.

Just as all other Red Rake Gaming slots, this one is too available in more than 100 currencies, including EUR, GBP, SEK, CNY, JPY, and mBTC, among others. It is translated in 22 languages.

Mother of Isis is a medium volatility slot that comes with an RTP of 95.3%. The game is available across desktop and mobile with Red Rake operator partners.

News about Red Rake’s new slot emerged shortly after the company announced a content distribution deal with major iGaming provider Microgaming that would see the Spanish studio integrate its portfolio of slot and video bingo titles onto its new partner’s platform.

The deal was part of Red Rake’s strategy to expand its reach by sealing partnerships with providers with substantial client networks and to introduce its content to new regulated markets. Early this year, the Spanish supplier relocated part of its business to Malta and obtained a license from the local gambling authority to better position itself for its coveted expansion.