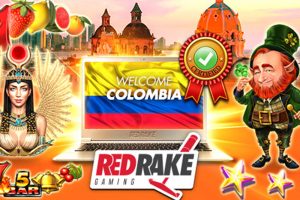 This marks yet another regulated market entry for Red Rake as the company looks to grow its international presence.

Red Rake said that its decision to expand in Colombia was prompted by demand from its operator partners in response to interest from local online casino players in Red Rake’s top performing gaming titles.

As part of its Colombian debut, Red Rake will soon make available a selection of its best performing casino games to several Colombia-licensed online gambling operators. Content that will soon launch across the LatAm nation will include Red Rake’s record-breaking title Super 15 Stars, an action-packed slot that combines multiple different feature games and bonus rounds, Million 7, which offers players one million winways as well as The Asp of Cleopatra, Ryan O’Bryan and Mother of Horus, among others.

After the initial launch of a selection of its games, Red Rake also revealed plans for a wider roll-out of gaming content across the Colombian market by the end of 2020.

Colombia is the second regulated market Red Rake has been given the green light to enter this year. In April, the company announced plans to debut its online casino titles in Belarus.

An Exciting Time for Red Rake

Commenting on their Colombian market entry, Nick Barr, Managing Director for Red Rake Malta, said that entering Colombia is “an exciting time for his company” as it continues to drive its business expansion by debuting its offering into new regulated markets.

Mr. Barr went on to say that the Colombian market is growing fast and that they are delighted by the demand from their operator partners to expand their partnerships with Red Rake to cover that market and to cater to the player demand for their “top quality and popular titles.”

Red Rake’s entry in Colombia is the latest of a series of big announcements made by the company in recent months. Late in June, the content maker launched its long-anticipated Super 15 Stars slot, the latest addition to its Super series. The game features a 5×3 layout and includes all of the special features that Red Rake’s previous Super games have as well as the brand new Stars Fusion Minigame.

The exciting minigame is triggered when players fill up a progress bar and offers them the chance for bigger wins by combining Super 15 symbols to form larger symbols and more winning combinations.

It was last month again when Red Rake announced a content supply deal with iGaming platform provider BtoBet. The deal saw Red Rake add 40 of its casino titles on its new partner’s platform.