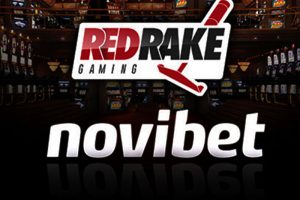 Supplier of content for the online casino sector Red Rake Gaming will be able to extend its footprint in the regulated UK and Greek markets through a recently secured partnership with Internet gambling operator Novibet.

The deal will see Novibet add some of Red Rake Gaming’s newest and most popular titles to its existing offering. The operator is primarily targeting the UK and Greek markets and its operational focus is completely in line with its new supplier partner’s strategy to grow its presence across multiple European jurisdictions.

Red Rake Gaming said today that under the terms of its content supply agreement with Novibet, the latter will roll out the supplier’s flagship slot Mystic Mirror as well as its latest releases such as Bonnie & Clyde, Tiger and Dragon, Marco Polo, and Knights, among others. Novibet is planning to initially add 14 slot titles by Red Rake Gaming this summer, it became known.

Red Rake Gaming was established in 2011 as a provider of social casino content. The company expanded into the realm of real-money gambling in 2015. It takes pride in offering “unique math model mechanics” which make its games stand out from the Internet gambling crowd.

The online casino content provider has embarked on a European expansion, seeking to establish itself in multiple regulated markets.

Yet Another Great Collaboration With strong presence in the UK and Greece, Novibet will help Red Rake Gaming further cement itself in the two lucrative markets. Commenting on the latest deal signed by the company, Red Rake Gaming’s Managing Director of Malta operations, Nick Barr, said in a press release that they are delighted to announce “yet another great collaboration.”

Mr. Barr went on to say that “this joint participation will be a significant step forward for both companies due not only to Novibet’s extensive experience in the igaming business, but additionally their strong focus on user experience.”

Red Rake Gaming’s new partner added that “having already established a strong presence in Greece and UK, Novibet is now expanding its operations to new markets” through strong partnerships with leading casino software providers. The operator further pointed out that Red Rake Gaming’s slots are already very popular among the traffic Novibet targets and that it is confident that the addition of titles to its offering “will instantly attract our players’ attention.”

As part of its expansion effort, Red Rake Gaming obtained earlier this year a license by the Malta Gaming Authority. The license enabled the supplier to expand across multiple jurisdictions. That announcement arrived on the heels of the company setting its commercial and business development teams in Malta.