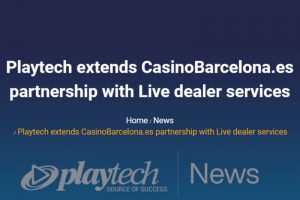 Gambling technology giant Playtech this week announced that it has extended its existing partnership with CasinoBarcelona.es to provide its Live Casino range to the Spanish operator.

Under the renewed and expanded agreement, CasinoBarcelona.es, the online gaming operation of the land-based casino of the same name, will add a variety of live dealer gaming products to the Playtech Slots, Casino, and Poker services it has already harnessed and has been offering to its players.

The initial rollout of Live Casino games will include Casiopea Ruleta, Express Ruleta, and Sling Shot Ruleta – variants that Playtech has developed especially for the Spanish market. All of the games are presented by native-speaking dealers.

Playtech and CasinoBarcelona.es first teamed up in 2017, when the online gaming operation went live with an exclusive desktop and mobile Playtech casino. Under that initial agreement, the iGaming brand first gained access to more than a hundred casino slot, table, and card games and later on went live with Playtech’s branded progressive jackpot content.

It was in 2017 again when CasinoBarcelona.es, which was launched in 2012 to service Spanish online gambling customers, also joined Playtech’s iPoker.es online poker network. Playtech’s poker product entered the Spanish iGaming space all the way back in 2011 and has over the years attracted a number of major clients.

Commenting on their expanded partnership with CasinoBarcelona.es, Playtech Chief Operation Officer Shimon Akad said that extending and deepening their relationship with key partners “is central to our strategy to offer the most comprehensive service and product range possible, and to deliver long-term value.”

Of the addition of their Live Casino content to the existing Playtech offering at CasinoBarcelona.es, Mr. Akad added that their live dealer games will create “an enhanced experience for players and ongoing marketing and retention opportunities for the company.”

CasinoBarcelona.es Director Xavier Ballester added that the extension of their agreement with Playtech and their decision to add the provider’s Live Casino products to their existing offering “is a natural progression, but also based on our product strategy in order to offer our users the widest diversity of Live Roulette of the Spanish market.”

Earlier this month, Playtech announced that it has teamed up with Isle of Man-headquartered gambling group GVC Holdings to launch together a new dedicated Live Casino studio. The deal was yet another important one scored by Playtech as it looks to further cement itself in the live dealer games vertical.

GVC and Playtech’s Elevation Live Casino studio is set to launch in several stages over the next two months. At first, the space will feature five blackjack tables and a roulette wheel studio. More popular games will be added at a later stage. Playtech said earlier that the new studio would be a “true visual spectacle” that would feature a vast video wall creating a backdrop of fully immersive skyline for enhanced player experience.