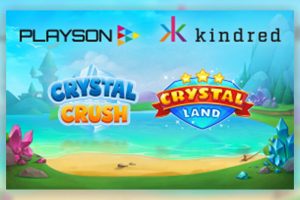 Online casino software developer Playson has teamed up with a major online gambling operator to further cement itself as one of the major players in the iGaming industry.

In a press release issued earlier today, the content provider revealed that a selection of its slot titles has gone live with Malta-based gambling operator Kindred Group. The gaming and sports betting group plans to roll out additional content by Playson at a later stage, it also became known.

Kindred’s iGaming brands, including its flagship operation Unibet, have initially rolled out two of Playson’s most innovative titles – Crystal Land and Crystal Crush. New releases are set to follow in the coming months.

Both games are gem-themed and their non-formulaic gameplay has proved particularly popular with mobile players. Crystal Land features a 7×7 grid with match-3 mechanics, while Crystal Crush has cluster pays on a hexagonal field with as many as 62 cells.

Playson hailed the recent launch of the above-mentioned two titles across Kindred’s brands as the latest in a series of strategic business moves. The company further pointed out that with Kindred boasting presence in several important regulated markets across Europe, including the UK and recently reorganized Sweden, the partnership with the operator introduces Playson’s products in front of “a huge new audience.”

Delighted to Be Growing Global Footprint

Lars Kollind, Business Development Manager at the casino content developer, commented that Kindred is “renowned for the value it places in innovation” and that they are thrilled to have marked the start of their joint work with the launch of two of their most inventive games.

Mr. Kollind added that they are “delighted to be growing our global footprint with such a respected operator” and that they look forward to a long and productive relationship.

Kindred Head of Casino David Robertson added that “Playson has been building an excellent reputation as a games provider” and that they are thrilled to now offer its content to their players. In praising their new games supplier, Mr. Robertson added that Playson is “a supplier to watch without a doubt and has clearly demonstrated its ability to provide quality content.”

In Europe, Kindred and its multiple brands are present in some of the largest regulated markets, including Sweden which regulated online gambling only recently. The company has also been actively looking to expand its regulated presence across the United States. Earlier this year, it went live in New Jersey and is expected to soon enter Pennsylvania’s regulated iGaming space in the coming months.

As for Playson, the provider announced last week that it has inked a content supply deal with online gaming and sports betting operator Betzest to deliver its entire portfolio of online slots. Betzest is among the newcomers in the highly competitive online gambling market. It went live last year, but has quickly built a formidable portfolio of 1,400 slot titles by some of the industry’s major suppliers.