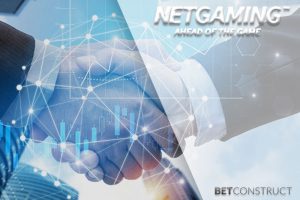 The company announced that it has teamed up with iGaming solutions provider BetConstruct to launch its entire slots portfolio with its new partner’s BetConstruct Spring Platform. The content distribution tool is among the most sophisticated ones in the industry and would provide NetGaming with access to a number of online gambling operators that will be able to launch its products across a wide number of markets.

Founded in 2018, NetGaming is a relatively new but rapidly growing iGaming studio. It is headquartered in Malta, but also has offices in the UK and India.

NetGaming’s portfolio includes several online slot titles, including Leprechaun’s Loot, Age of DaVinci, Treasures of Egypt, and Wrath of the Dragons, among others. The company also released its first table games not long ago. All these as well as any future releases will be integrated into BetConstruct’s Spring platform, under the recently penned agreement between the two companies.

NetGaming’s titles are currently available in 26 different languages and can be played with more than 40 currencies as the games studio is gearing up preparations to enter several emerging markets such as Africa and the CIS region.

Of their latest content distribution deal, NetGaming’s CEO, Pallavi Deshmukh, said that they are thrilled to be teaming up with BetConstruct in a move that will certainly expand and strengthen their customer base.

The innovative gaming studio’s boss went on that their new partner is constantly looking to tap into new, regulated markets, which is an approach that “fits well with NetGaming’s commercial strategy for rapid growth and expansion.”

Aida Harutyunyan added that they “happily welcome NetGaming” and that “the innovation and diversity of their portfolio will see wider success among our partner operators and their players.”

The deal with BetConstruct is set to help NetGaming deliver on its plans to enter several new regulated markets this year. The games studio has also revealed plans to roll out a mixture of branded and original games each month throughout the year.

Late last year, NetGaming secured another major industry partner to spearhead its growth and expansion efforts. The studio signed a platform-to-platform partnership with major industry provider Relax Gaming to gain access to a plethora of operators and their clients across a wide number of markets. The deal between NetGaming and Relax Gaming saw the former become part of the latter’s Powered By program for commercially independent partners. Relax Gaming expanded significantly its network of partners last year through said program.