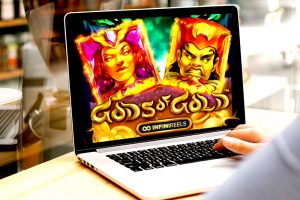 Casino game developers and providers NetEnt and ReelPlay today announced that they have teamed up to strengthen their rights associated with their respective franchises InfiniReels and Infinity Reels.

Under the terms of the two companies’ recent alliance, NetEnt and ReelPlay are set to work together to jointly extend and protect their marks.

NetEnt is set to release its first InfiniReels game – Gods of Gold InfiniReels – on May 14. The InfiniReels mechanic is the latest innovation to be presented by the Swedish content developer. It increases the number of reels in a slots game with each win, with an infinite number of reels and win ways available within that game.

ReelPlay debuted its Infinity Reels mechanic last November. The new feature provides the chance to add an additional reel, re-spin, and multiplier with each spin.

Commenting on their partnership with ReelPlay, Bryan Upton, Director Games at NetEnt, said that as both companies clearly followed similar ideas independently from one another, “it made sense for us to come together to reinforce our unique propositions in a highly competitive market.”

Mr. Upton commended and thanked their partner for “their innovative approach and for working together with us in these dynamic times.”

David Johnson, Chief Commercial Officer at ReelPlay, added that they are happy to have agreed a collaboration “with an established global pioneer such as NetEnt.”

ReelPlay was founded in 2014 as Chance Interactive, but rebranded in 2019. The slots studio is based in Sydney, Australia. The company holds a license from the UK Gambling Commission to provide its content to UK-facing gambling operators and content aggregators, but its portfolio is available across multiple other markets, as well.

Swiss and Colombian Debut for NetEnt

News about NetEnt’s partnership with ReelPlay emerged shortly after the Swedish company announced that it has introduced its content in two new regulated markets.

In early April, NetEnt announced that it has obtained the global standard ISO 27001 certification that enabled it to enter the Swiss online gambling market and supply its content to locally licensed online casinos.

Last week, the major Swedish supplier announced its Colombian debut through a previous partnership with US online casino operator Rush Street Interactive. NetEnt has been supplying its content to Rush Street’s US-facing online gaming operations for a while now.

In Colombia, Rush Street is one of more than 15 locally licensed operators following the reorganization of the Latin American nation’s iGaming market several years ago.