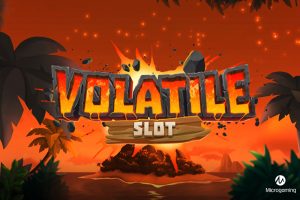 The latest member of Microgaming’s elite club of exclusive game creators was founded by gaming industry experts James Curwen, who acts as CEO of the game development studio, and Will Mathieson, who serves as Golden Rock Studios’ Chief Product Officer. The studio is based in the UK and will be distributing its titles exclusively through Microgaming’s casino content platform.

Volatile Slot is now available across Microgaming’s entire network of online gambling operators after a two-week period of exclusivity with LeoVegas. It was the first game to be crafted by Golden Rock Studios.

Action takes place across a five-by-three grid with 10 paylines that pay left to right. The reels are packed with dynamic features, including two game modes and a free spins bonus. A moody volcano backdrop and a fitting drum soundtrack accompany players in their hunt for a big win.

There are two types of wilds that can land on the reels – volcano wilds and exploding wilds – with both awarding multipliers and triggering the free spins bonus feature. Volcanic wilds can hit reels two, three, and four. These substitute for any other symbol on the grid and have the potential to transform into exploding wilds, revealing 2x, 3x, or 4x multipliers.

The free spins feature awards a player a minimum of 10 free spins. It also treats those who are lucky enough to trigger it to enhanced reel sets and bigger potential for volcanic wilds and exploding wilds to spin into action.

Commenting on the latest addition to their portfolio, Microgaming Chief Commercial Officer Jean-Lic Ferriere said that “Volatile Slot is an impressive debut title” and that with more than 15 new slots planned, “Golden Rock Studios are set to broaden our range with fresh and diverse content.”

Golden Rock Studios CEO James Curwen added that they are proud to team up with Microgaming and “look forward to providing them with many more exclusive games in the coming months.”

With more than two decades of experience in the gambling industry, Mr. Curwen certainly knows its ways. He had previously served as Chief Gaming Product Officer at William Hill and Chief Gaming Officer at Superbet, among multiple other roles in the sector.

Of his company’s first slot release, he said that it “delivers an exhilarating, high-volatility gameplay experience and is filled with stimulating game mechanics and vibrant visuals.”

Source: Microgaming heats up its portfolio this November with Volatile Slot