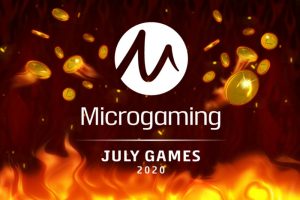 July is upon us which means a new month of hot titles from Microgaming and its third-party studio partners.

The major online casino content provider kicked off July in style with its new 80s inspired online slot Miami Glow that arrived packed in a five-by-three layout with a win potential of up to 12,500x a player’s initial stake.

Miami Glow was crafted by Snowborn Games, one of the independent iGaming content makers working exclusively with Microgaming.

For those slots fans who seek a little bit of additional thrill in the form of higher volatility, Microgaming is set to roll out Mayan Eagle on July 7. The game was developed by All41 Studios.

Mayan Eagle features six reels and five rows that guarantee 15,625 winways per each and every spin. The game also includes the all-new Nobleways feature.

The slot’s Rolling Reels mechanic produces winning combinations, creating room for new symbols that cascade into the grid to up the win potential. Players need four or more scatter symbols to spell MAYA and trigger the Free Spins round that brings an ever-increasing multiplier for a win potential of up to 13,000 times the initial stake.

Next up is Arthur’s Gold, yet another high volatility slot that promises a lot of excitement. The game was created by Gold Coin Studios and is set to be released on July 9.

Themed around the adventures of King Arthur and his knights, Arthur’s Gold takes players to a world of riches with ten-of-a-kind wins and a Free Spins game that features respins with up to three reels of expanding wilds for win potential of more than 4,000x the initial bet.

Immortal Glory by Just For The Win is also part of Microgaming’s July line-up of new content. The game is a high-volatility, 40-payline slot that comes with win potential of up to 10,000x the initial stake. It takes players to Ancient Greece, the cradle of the Olympic Games.

Next in line is Diamond Inferno by Triple Edge Studios. The game will set its reels ablaze on July 21 with its fiery graphics, intuitive gameplay, and traditional and much-loved casino icons, including sevens, lucky dice, and golden bars, among others.

Diamond Inferno is a medium-volatility slot that is packed with exciting features, including a multiplier trail, expanding reels, respins, and diamond scatter wins. Each win a player lands offers a respin with a larger reel set up to 50 paylines. At this set, a multiplier trail shows up with up to 10x for even greater win potential.

Microgaming is also set to add a host of titles from its large network of content partners on its platform this month, including Banana Drop by Crazy Tooth Studio, Monster Blast by Skillzzgaming, and Queen of Embers by 1X2gaming, among others.