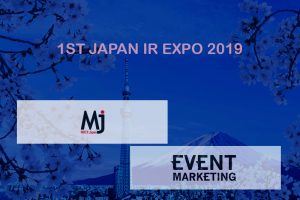 The inaugural edition of the Japan IR Expo kicked off today at INTEX Osaka in Osaka, as the major Japanese city is looking to step up its efforts to host one of Japan’s first integrated resorts with dedicated casino gaming space

The event will run through Thursday, May 16, and organizers expect that it will attract more than 10,000 visitors who are interested in the development of the IR and casino gambling sectors in Japan.

It should be noted that one of the main reasons why Osaka has been selected as the host of the 1st Japan IR Expo has a lot to do with the fact that the city is among the favorites in the race for hosting the nation’s first integrated resort with a casino.

The Japanese Diet legalized casinos as part of larger IR properties in December 2016 and approved the fundamental rules under which the country’s nascent casino industry would be regulated in the summer of 2018. Japanese authorities will issue up to three licenses for casino resorts in three locations around the nation. It is yet to be seen when the winning bidders for the licenses and the preferred locations will be announced.

Until then, Osaka has clearly looking to up its bid to become the host of one of the first IR properties to be developed in Japan. Hundreds of exhibitors are set to present their integrated resort vision and ideas of how the offering at the nation’s future IR properties should be boosted at the 1st Japan IR Expo. The event is also being attended by some of the world’s largest gaming and hospitality companies, some of which are interested to expand namely in Osaka.

A number of Japanese municipalities have expressed interest in hosting one of Japan’s first three integrated resorts and several of them have already announced specific plans, with those being Tomahomai in Hokkaido, Sasebo in Nagasaki Prefecture, and Osaka and Wakayama in the Kansai region.

Osaka has by far outlined the most ambitious plan for a resort on the man-made Yumeshima island, which will also host World Expo 2025. City and prefecture officials believe the property could annually attract more than 24 million people.

Some of the major companies that have been eyeing entry in Japan’s casino market have said that they would be bidding for an Osaka license. MGM has been one of these companies. Earlier this week, the Las Vegas casino giant and its Japanese partner Orix presented their formal bid to obtain the necessary authorization to jointly build an integrated resort in Osaka.

Osaka officials launched late last month the request-for-concept application phase during which parties interested in developing and operating an integrated resort will be identified. That phase ends on May 24, which means that interested IR operators have up until that date to inform authorities about their Osaka expansion ambitions.