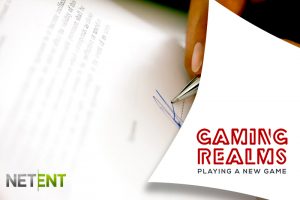 Online casino content maker Gaming Realms has teamed up with fellow supplier and developer NetEnt in a multi-year agreement that will see the former license one of the latter’s most popular slots to create a new epic game that features the Slingo mechanic.

Under the terms of the recent deal between the two companies, Gaming Realms will be able to license NetEnt’s hit title Starburst and develop a new game that will combine the hugely popular Slingo grid mechanic and all the classic features of the existing slot that is loved by many players around the world.

NetEnt first rolled out its Starburst slot in 2012. The game features five reels, three rows and ten paylines that pay out both ways. Its bonus features include expanding wilds and respins.

Earlier this year, NetEnt expanded the Starburst brand by launching the Starburst PowerPots Community Jackpot System. The jackpot concept allows players to collect Starburst tokens across a number of NetEnt games for a chance to claim a share of a community jackpot.

The multi-year agreement between NetEnt and Gaming Realms will see the launch of the Slingo Starburst game. As mentioned earlier, the game will combine all the features of NetEnt’s existing slot with the Slingo mechanic.

The game will be launched to the real-money online gaming market sometime next year and will be available globally.

Slingo Originals is the game development studio behind the many Slingo games that have been launched over the years. The Slingo concept was invented in the 1990s and was first launched in the form of a real-money game in land-based casinos across the US. It was then brought into the online gaming space.

Commenting on their agreement with NetEnt, Gaming Realms Chief Financial Officer Mark Segal said that they are thrilled to have secured licensing rights to its partner’s Starburst brand, which has cemented itself as a “legendary slot that has dominated the gaming industry for years.”

Mr. Segal went on to say they are confident fans of both the Slingo and the Starburst brands will enjoy this new collaboration as it will bring together the best features of the two brands.

Andy Whitworth, Chief Commercial Officer at NetEnt, said that widening the reach of their portfolio and building awareness in new markets is a “vital part” of their growth strategy.

Mr. Whitworth went on to say that Gaming Realms boasts an extraordinary reach among Slingo fans, particularly in the US and that they are certain that “great games will come out from combining Gaming Realms expertise, the Slingo grid mechanic, and our renowned IP.”