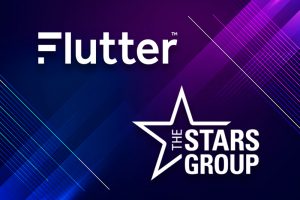 Irish gambling powerhouse Flutter Entertainment today announced that it is set to complete its £10 billion tie-up with The Stars Group on May 5.

The announcement comes after both Flutter and The Stars shareholders overwhelmingly approved the deal last week and the two companies secured all the remaining regulatory approvals.

After the closure of the deal, Flutter will own a 54.64% stake in the enlarged gambling group, while The Stars will hold a 45.36% stake in it. The combined business will be headquartered in Dublin with premium listing on the London Stock Exchange and secondary listing on Euronext Dublin.

In a statement on its official website, Flutter said today that it will continue to employ a federal operating model, which it first adopted in early 2018. The company explained that said model “leverages the teams’ local knowledge and ensures that they have the autonomy to respond to developments in each of their local markets while still having access to the substantial resources that the broader Group has to offer.”

Once the deal closes later this week, Flutter will initially have five reporting segments, the company pointed out today.

Later on, the enlarged group intends to move to a four-divisional management and operational structure that will be adopted in two steps. Firstly, the group will merge the current The Stars Group International division with Paddy Power Betfair’s operations. Secondly, Paddy Power will move into a new UK & Ireland division along with SkyBet.

Flutter said that each of the changes due to be implemented will aim to maintain momentum within each business as the group looks to “achieve the potential revenue and cost benefits of integration.”

Commenting on the approaching finalization of Flutter’s tie-up with The Stars, Peter Jackson, CEO of the Irish operator and future CEO of the enlarged organization, said that the combined group “brings together exceptional brands, products, and businesses, a hugely talented and experienced team, and a diverse global presence.”

Mr. Jackson went on to say that “the strength of our combined portfolio of assets means that we approach the future with confidence in these uncertain times.”

The executive also praised The Stars’ CEO, Rafi Ashkenazi, for “creating the exceptional business that [the group] is today” and that his role in “transforming TSG from a single product operator to a diverse global leader with multiple product offerings” has been instrumental.

As mentioned earlier, the merger can now be completed after both Flutter and The Stars investors blessed the deal at special meetings last week. The tie-up awaited approvals from the gambling regulators of the US states of New Jersey and Pennsylvania, and in Bulgaria as well as approval from Australia’s Foreign Investment Review Board in order to be finalized. All these were obtained this past week.