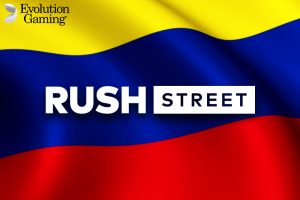 Evolution Gaming has extended its existing relationship with Rush Street Interactive, the iGaming division of US regional casino operator Rush Street Gaming, with the launch of six of its Evolution First Person games in Colombia with RushBet.co.

All of the above are RNG versions of Evolution’s Live Casino games that are all extremely popular across various European markets and North America.

As part of its extended relationship with Rush Street, Evolution will be able to add the six First Person titles to the casino operator’s RushBet.co Colombian iGaming platform. The games will be rolled out gradually over the coming weeks and will be available to RushBet.co players across desktop, tablet, and mobile.

Evolution said that a “similarly rich” Live Casino offering is set to be expected to be launched by the provider and Rush Street in Colombia over the next few weeks and months.

Commenting on their extended deal with Rush Street Interactive, Evolution Chief Commercial Officer Sebastian Johannisson said that they are “delighted to be growing” their existing relationship with an online gaming operator that is “at the leading edge of gaming industry convergence, constantly innovating and pushing boundaries.”

Mr. Johannisson went on that Evolution shares the same ethos and that it looks forward to building on the successes it has achieved together with Rush Street Interactive to date.

Richard Schwartz, President of Rush Street Interactive, said that his company has joined forces with Evolution “because we wanted to offer our RushBet.co players in Colombia a premier Live Casino mobile playing experience.”

Mr. Schwartz added that the “breath, variety, and innovation” of Evolution’s Live Casino portfolio and the provider’s services and operational excellence give them full scope to achieve their Colombian objectives.

In separate news from earlier this week, Evolution announced that it has made an offer to acquire fellow Swedish online casino games provider NetEnt in a deal that values the latter company at approximately SEK19.6 billion ($2.1 billion).

Evolution Chairman Jens von Bahr said that the proposed strategic deal will mark a significant step towards his company’s “long-term vision of becoming the global market leader in the online casino industry.”

A majority of NetEnt’s shareholders have recommended the company’s tie-up with Evolution.