The New Jersey Casino Control Commission will today review the application of gaming and hospitality company Elorado Resorts for a permanent license for the operation of the Tropicana Atlantic City hotel and casino resort, local news outlet The Press of Atlantic City reports.

The commission is holding a meeting today at 10:30am local time and Eldorado’s license application is part of its agenda.

The Nevada-based casino company is set to receive plenary qualification to operate in the Atlantic City casino market nearly eight months after it completed the acquisition of Tropicana’s parent company – Tropicana Entertainment – in a deal valued at $1.85 billion.

Eldorado received an interim license to run the casino back in September, a month before the closure of the acquisition deal.

Tropicana first opened doors in 1981 on Atlantic City’s legendary Boardwalk. The hotel and casino resort features 2,400 hotel rooms, a casino with a number of slot machines and table games, retail space, an entertainment complex, an IMAX movie theater, a spa, and a number of dining outlets.

Tropicana is currently the city’s second highest grossing gambling venue, behind the Borgata which has maintained its top position for several years now.

An Eventful Week for Eldorado 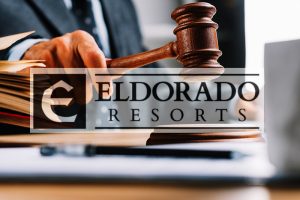 It could be an eventful week for the hotel and casino operator. Aside from the potential approval of its license application, Eldorado could also announce its multi-billion merger with its larger rival Caesars Entertainment Corp.

According to media reports from last week, the two companies are inching closer to combining their operations in a cash-and-stock deal that would create one of the world’s largest casino gambling operators.

Eldorado and Caesars first announced that they were in early merger talks in March. It also became known back then that Caesars has provided its suitor with access to its financial data, a necessary move for due diligence.

Eldorado bought Tropicana Entertainment from New York activist investor Carl Icahn. Mr. Icahn has amassed a 28.5% stake in Caesars since the beginning of the year to become the company’s largest shareholder. According to analysts, that fact could play an important role in a potential deal between Caesars and Eldorado.

Sources believe that the two companies are likely to announce their combination as early as this week, if talks do not fall through.

However, a merger between the two operators will need approval from a number of gambling regulators as well as from competition authorities. Caesars already owns three casinos in Atlantic City. The combined business will operate four of the city’s nine operational casinos and will hold a 44.4% share of the local market, which is not likely to please authorities at all. To avoid a near-monopoly situation, Caesars and Eldorado’s combined operation could be asked to sell some of its properties.