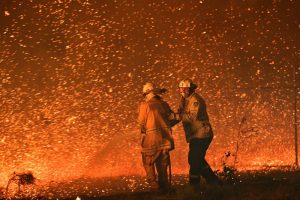 The family of Australian billionaire businessman James Packer and his casino company Crown Resorts have donated A$4 million to bushfire relief charities as Australia is engulfed in an unprecedented bushfire crisis.

A spokesperson for the Packer family said today that the donation would be directed towards fire and wildlife services in the states of New South Wales, Victoria, and Western Australia.

In November, Mr. Packer’s family pledged A$1 million to the NSW Rural Fire Service, but Australia’s bushfire crisis has rocketed to new, even more terrifying levels since then.

Of their latest donation, Mr. Packer said that “Australians are digging deep to support each other in these tough times, it’s truly inspiring.” He went on that his family and Crown Resorts “are eager to do more and the best way we can help, is to significantly increase our donation.”

News about the Packer family upping its donation to A$5 million arrived after Crown Resorts’ hotel and casino complex in Melbourne offered 200 rooms to Mallacoota evacuees who were transported by a navy ship over the weekend and had no other place to go.

Mr. Packer’s latest donation joined a long list of pledges made by Australian and international corporations and celebrities in recent days. US singer Pink pledged A$500,000 to bushfire relief efforts, Australian actor Nicole Kidman and her husband Keith Urban made a A$500,000 donation.

Australian actor Chris Hemsworth and his family would give A$1 million, while singer Kylie Minogue pledged another half-million dollars.

Fires Claim Millions of Animals and Thousands of Homes

Australia’s bushfire catastrophe has been going on for months, scorching land, killing people and wildlife, polluting the air, and destroying massive tracts of forests. The country’s unprecedented bushfire season has been fueled by record temperatures and widespread lack of rain.

Firefighters and volunteers are using milder weather and rain that has finally arrived these past few days to contain some of the fire fronts, but officials warn that temperatures are expected to soar again by Friday and huge fires in NSW and Victoria could merge to form a mega blaze.

The bushfire crisis is believed to have killed 25 people so far. Millions of animals have died since September.

NSW officials said Tuesday that fires in the state had claimed just under 1,600 homes and damaged another 653. In neighboring Victoria, about 200 homes have been destroyed, adding to more than a hundred lost in other states around the country.

Australian Prime Minister Scott Morrison said Monday that the crisis could go on for months and that the government would commit A$2 billion to recovery over the next two years.