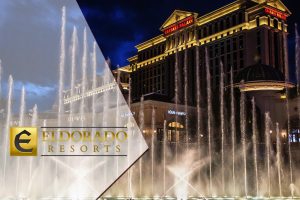 Eldorado Resorts and Caesars Entertainment Corp. are a step closer to closing their $17.3 billion mega-merger that will create the largest US casino operator by number of properties.

At separate Special Meetings of Stockholders that took place this past Friday in Reno and Las Vegas, the shareholders of the two companies voted in favor of the proposed deal.

The transaction is expected to close sometime in the first half of 2020 and is now subject to regulatory approvals and other customary closing conditions.

In a joint statement issued by Caesars and Eldorado following the Friday shareholder meetings, the two companies announced that the majority of their stockholders voted in favor of the merger. Shareholders of about 87% of Eldorado stock approved the transaction and holders of about 76% Caesars stock gave the nod to the move.

After months of speculations over the future of Caesars, the company announced in June that it has agreed to combine its business with that of its much smaller rival Eldorado. The enlarged group will run about 60 properties across the US. It will be headquartered in Reno, Nevada where Eldorado is currently based and that company’s current boss, Tom Reeg, will step in as CEO of the newly formed casino powerhouse.

First reports that the Las Vegas gaming and hospitality giant could be up for sale surfaced last fall, or about a year after Caesars emerged from a long and complex bankruptcy process. Early this year, activist investor Carl Icahn became the largest shareholder of the company and the actual push for Caesars to get sold began.

Mr. Icahn said that a merger or sale of the company was the best path forward. Caesars and Eldorado began talks over a potential deal this past spring. However, the Reno-based operator was not the only bidder for the Las Vegas casino and hospitality powerhouse.

Last fall, Caesars received an offer from Golden Nugget boss Tilman Fertitta, which it declined. According to reports from earlier this year, the Texas businessman was preparing a second offer for the company, but never officially made such an offer.

As mentioned earlier, the deal between Caesars and Eldorado is expected to close by June next year. The two companies still need approval from a number of regulators in order to be able to proceed with the transaction’s closure.

Many believe that the casino operators could be ordered by competition regulators to offload some of their properties in order to be able to clear the final hurdles before their combination. For instance, the combined entity would probably be asked to sell a property in Atlantic City as Eldorado currently owns one casino resort in the popular gaming hub, while Caesars manages three such properties. Atlantic City has nine operational casinos, which means that the enlarged group would control nearly half of the local market.

Last month, Caesars sold its Rio All-Suites Hotel and Casino resort in Las Vegas, while Eldorado offloaded over the summer Isle of Capri Casino in Kansas City, Missouri and Lady Luck Casino in Vicksburg, Mississippi to casino operator Twin River Worldwide Holdings. Analysts say that the two companies could move to sell more of their properties ahead of their merger in order to secure regulatory approval and eventual closure of the transaction.

[ad_1] Illinois Governor J.B. Pritzker on Thursday signed an executive order that could pave the…