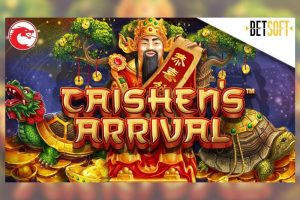 Malta-based online casino content studio Betsoft Gaming released Tuesday the second of a trio of Asia-themed slots as part of its strategy to enhance its presence across the booming Asian marketplace.

The latest addition to Betsoft’s hefty portfolio of online slots is titled Caishen’s Arrival and, as its name suggests, is inspired by the Chinese God of Wealth, Caishen.

The game is complete with trademark, Betsoft’s cinematic graphics and gameplay and is jam-packed with a plethora of creative features, including money trees and golden artifacts as well as Caishen himself.

Caishen’s Arrival features a multiplier of over 35,000x, which provides for a great win potential. A portrait of Caishen is serving as a wild symbol in this new slot title. Striking three portraits of the Chinese deity on a reel earns players a full reel wild and a free re-spin.

To further bask into Caishen’s world, players can seek out the coin purse scatter. They can trigger rewards when three scatters appear anywhere on the reels.

The game also offers players 10 free spins with a 3x multiplier on all wins.

Commenting on the recent release of its latest slot and the second one of the Red Dragon series, Annamaria Anastasi, Marketing Director at Betsoft, said that “Caishen’s Arrival is a brilliant addition to our online offering and Red Dragon series.” She went on that “with a sky-high multiplier and plenty of pay-lines, players venture into a land of riches beyond expectation.”

It was last month when Betsoft announced plans to release a three-title slots series, with all three games celebrating the rich and multi-layer Asian culture. The first title of the series – Bamboo Rush – went live last month. The gaming supplier said that it would release one Red Dragon game every month through the end of the year.

Bamboo Rush invites players on a hunt for the Golden Panda scatter that triggers a spins feature. Players can win up to 20 free spins. The game also features a multiplier of over 53,000x in a single spin.

Dragon & Phoenix will be the final game of the series. It is set to be released next month. Betsoft said that all its three new titles would feature revolutionary themes and would offer plenty of fun to “keep every type of player engaged and entertained.”

Of their new Asia-themed slots series, Ms. Anastasi said last month that it was “one of the highlights of our 2019 content calendars with three slots that will take players’ breath away from the very first spin.”

“Packed with mind-blowing features”, the trio of games would bring to a close one of Betsoft’s most successful years and would continue that strong momentum into 2020, Ms. Anastasi added, talking about their expectations and plans relating to their three new slots.