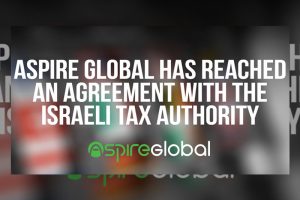 Online gambling group Aspire Global has settled a tax dispute with the Israel Tax Authority (ITA) and has agreed to pay €13.7 million in retroactive taxes as part of the recently reached settlement.

The tax dispute stemmed from a previously disclosed tax audit relating to management and control jurisdiction, permanent establishment, and transfer pricing among the group entities.

Under the terms of its agreement with the Israeli taxman, Aspire Global has agreed to pay the €13.7 million tax bill that relates to 11 fiscal years from 2008 through 2018. The settlement, which Aspire Global announced on the last day of 2019, puts an end to all related investigations into the company’s activities.

Aspire Global is based in Malta and trades on Nasdaq Stockholm, but also runs an office in Israel and is closely linked to the Mediterranean country.

Aspire Global’s audit has been mentioned in the Financial Notes and Risk Management sections of its 2018 Annual Report, interim reports and the prospectuses related to its IPO and bond issue.

As part of its agreement with the ITA, the company will not be imposed penalties as a result from its audit. It also became known that the recently secured agreement covers the entirety of Aspire Global’s activities in Israel.

Tax Bill to Be Listed as Exceptional Item

Aspire Global said this week that its Israeli tax bill would be listed as an exceptional item in its financial accounts for 2019 and that it expected to make the payment in the coming days.

The gambling group explained that it chose the settlement with Israel’s taxman over a lengthy period of uncertainty.

In a statement on its official website dated December 31, 2019, the company said that its financials remain strong despite the ITA agreement and the hefty tax bill, and that group cash totaled €43.1 million through September 30, 2019.

Aspire Global wrapped a busy year that saw it acquire online casino content creator and supplier Pariplay and expand in the US regulated online gambling market through that acquisition. In early November, Aspire Global announced that then newly acquired Pariplay had reached a content supply deal with 888casino that gave the iGaming provider access to the New Jersey iGaming space. Under the terms of the deal, Pariplay agreed to deliver proprietary and third-party content to the major online casino brand.

Aspire Global’s white label subsidiary landed in regulatory trouble in Sweden on several occasions throughout the year. AG Communications, which is licensed to run several gambling brands by the Swedish Gambling Authority, was first fined for violating the Scandinavian nation’s self-exclusion rules and was later on slapped another fine for bonus offer breaches.

In October, the Swedish Consumer Agency (Konsumentombudsmannen, KO) said that it was suing AG Communications and its Karamba online casino brand over a bonus offer that practically “forced” players to wager sums way too large in order to be able to claim the advertised bonus and free spins.

Source: Aspire Global has Reached an Agreement with the Israeli Tax Authority