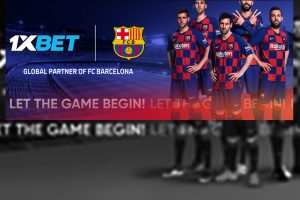 The deal took effect on July 1, with 1xBet becoming the new Global Partner of Barça. In a statement on its official website, the major football club said that the 1xBet collaboration was part of its global expansion strategy.

The statement further read that the deal also “relates to [the club’s] mission to source the best possible partners in different categories” and will help it maintain its leading position not only on the field but also in terms of landmark sponsorships and marketing endeavors.

Under the terms of the recently inked deal, FC Barcelona and its online gambling partner will be working together on different marketing initiatives. The sponsorship will give 1xBet access to Barça players to create promotional material and marketing campaigns.

With experience in the industry of more than 12 years and presence across multiple regulated and unregulated jurisdictions, 1xBet is among the widely recognized online gaming and sports betting brands.

The operator recently boasted a content supply deal Pragmatic Play, under the terms of which 1xBet will be able to roll out the online gambling provider’s brand new live casino offering.

It is also important to note that 1xBet is no stranger to football sponsorships. Last year, the operator was signed by Tottenham Hotspur F.C. as its Official Betting Partner for Africa, where the Premier League football club has more than 100 million followers.

It was in 2018 again when 1xBet was named International Presenting Partner of Italy’s Serie A for the 2018 through 2021 football seasons. The deal between the operator and Italy’s top league covered Europe, Africa, the Middle East, North Africa, and the Americas. Commenting on naming 1xBet as their latest Global Partner, Josep Pont, member of FC Barcelona’s board and Head of Commercial Area, said that they are convinced the deal will help them “grow both on and off the field” and connect with new sports fans all around the world.

1xBet spokesperson Alex Sommers said that they are pleased with the recently announced agreement and that the cooperation between the two world-class brands of the football club and the operator would prove lucrative for both parties.

The 1xBet spokesman went on to say that with FC Barcelona’s slogan being More than a club, they hope fans “will come to realize that 1xBet is more than a bookmaker” throughout the course of the next five seasons.

1xBet operates in the Spanish online gambling market through a license issued to its local subsidiary Plataforma de Apuestas Cruzadas, S.A. The operator is authorized to provide online sports betting services in the country.

Earlier this year, 1xBet landed in some hot water as Kansspelautoriteit, the Dutch gambling regulator, slapped it with a €400,000 fine for targeting local gambling customers without being authorized to do so. Last year, the operator faced legal trouble in Israel, where a Tel Aviv court ordered local Internet service providers to block its domains in the country.