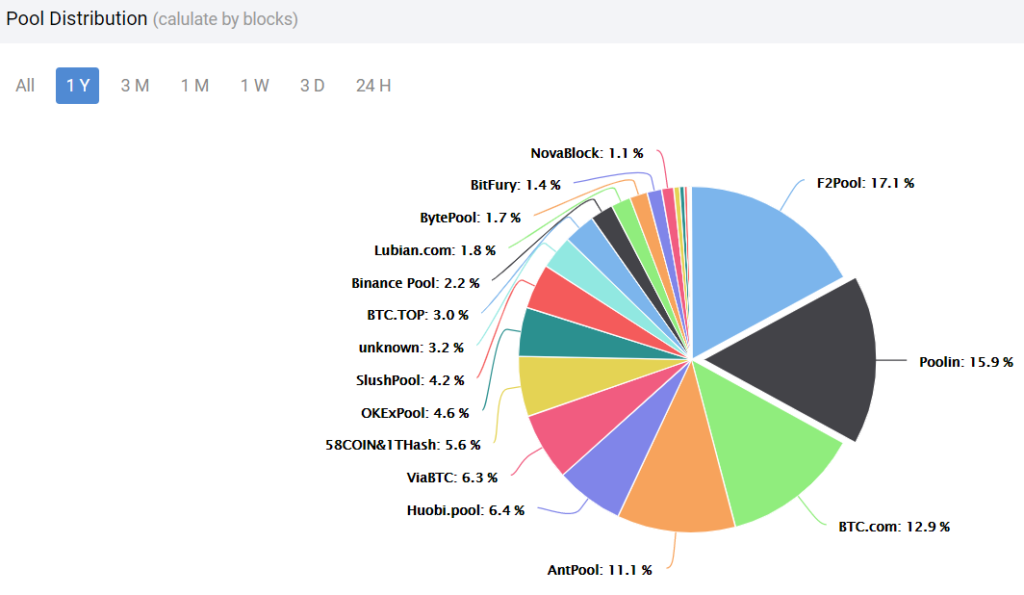 Bitcoin’s underlying computer network is the largest, most sophisticated computerized system in the world with working units in almost every part of the globe, from China to Kazakhstan to Venezuela to the U.S.

And with recent all-time highs in hash rate and difficulty level, the Bitcoin mining industry is more competitive than ever. Meanwhile, there are questions about whether efforts toward its decentralization are enough to combat China’s dominance in the sector.

An important element to Bitcoin mining’s overall growth as well as its decentralization is the network of mining pools that bring miners together to pool their resources to more strategically wrestle block subsidies from an increasingly competitive system.

The Role Of Mining Pools

But even with the best available equipment, miners today need a sophisticated strategy to be successful; as well as a bit of old fashioned luck, according to Ryan Porter, head of business development for BitOoda.

“There is the concept of ‘luck’ that you need to factor into mining,” Porter told Bitcoin Magazine. “If you contribute 1 percent hash rate to the network, you will generate 1 percent of the blocks over time, but in the short run your rewards can be very inconsistent depending on how lucky you are. For example, one week you might win 5 percent of blocks, then you may not win any blocks for two weeks.”

And this inherent felicity is what motivates many miners to pool their hash power together.

“The key role a mining pool plays is smoothing out the revenue stream for miners,” Porter added. “A lot of the mining pools will take on the risk of ‘luck’ and will pay the miners based on the expected bitcoin production of their hash power, in exchange for a fee from the block rewards the pool wins.”

John Lee Quigley, head of research for bitcoin mining media company HASHR8, which is dedicated to Bitcoin decentralization and security, is seeing things getting tougher for miners — which could also be motivating the growth of mining pools.

“Many large-scale miners operate just above the margin and they can’t afford to take on the variance of block-finding by themselves,” he said. “They have expenses to meet and they need a regular payout. Mining pools take on the variance for them. They play an essential role in the industry.”

Not only do mining pools provide equipment and advice, they are better able to operate a sophisticated mining strategy using algorithms like profit switching to maximize every profit angle.

Most Mining Pools Are In China

With the notable exception of the first ever created pool, SlushPool (headquartered in Prague), all large mining pools are based in China, reflecting the current concentration of global hash rate (with anywhere from 50 to 65 percent of all the world’s hash rate concentrated in the country, depending on source).

Large-scale mining operations have grown faster in China than they have in other parts of the world, and pools have been a major part of this development. In a recent interview, Porter noted that fully 55 percent of Bitcoin’s global hash rate comes out of just four large mining pools in China: F2Pool, Poolin, BTC.com and AntPool.

But as mining becomes increasingly competitive with new iterations on technology and soaring difficulty rates, even miners in China, who leverage some of the cheapest power rates in the world, are still seeking the help of pools.

Individual miners join pools because they can operate with sophisticated strategies like profit-switching algorithms, gain insight and help from pool operators and find ways to secure equipment.

Can North America Catch Up?

In our conversation about the concentration of mining pools in China, Quigley highlighted just how far off North America — the next-largest region for Bitcoin mining — is from truly competing with the epicenter.

“North America is playing catchup but they haven’t left the starting blocks when it comes to mining pools,” Quigley said. “It will be difficult for North American pools to compete. We will likely see more emerge over the coming years, but how they will fare is questionable. The mining pool business model already has extremely low margins and North American businesses will face far greater overhead than their Chinese counterparts.”

In addition to this difference in overhead, Quigley noted that China-based pools already have a near-insurmountable advantage in their relationship with the industrial mining hardware operations.

“Moreover, most miners are based in China and many deals are carried out on a face-to-face basis,” he explained. “In the major hubs like Beijing, there will be many secretive meetings that only those in the mining industry will attend. The hash rate that gets negotiated at these meetings is virtually exclusive to Chinese companies and it will be almost impossible for North American  pools to compete for the majority of it.”

Governments Get Involved, Some With Their Own Mining Pools

As far as mining pools go, 2020 has been the year governments joined the club.

Venezuela has set up its own national mining pool. Iran has introduced a new mining strategy and licensed mining farms, which now come under government regulation. Kazakhstan’s government is investing in and promoting bitcoin mining to help diversify its oil and gas sector.

But do these new players make a difference to the decentralization of mining?

Quigley of HASHR8 weighed in on these surprising developments in the bitcoin mining sector.

“It’s difficult to assess how various governments will respond as the Bitcoin mining industry continues to grow,” he explained. “Different governments will react in different ways. From Venezuela, we have recently observed authorities seizing rigs from citizens. Now, they request that all miners register with the government and use a national mining pool. Iran has taken a more friendly approach and encouraged investment in mining infrastructure. They have licenced some mining operations and also provided subsidies on electricity in some cases.”

And there’s a good chance that these three examples are just the beginnings of more governments formally entering the bitcoin mining space by pooling hash rate. But that may not prove to be a good thing for Bitcoin’s decentralization or security.

“Mining will always have a precarious relationship with government,” Quigley said. “Governments getting closely involved in the mining industry will certainly raise red flags among those that are aligned with the Bitcoin ideology. In the case that all hash rate was directed at government-owned mining pools, they would hold the ability to censor certain transactions which is similar to our current financial system.”

With the current landscape of bitcoin mining pools assessed — including the industry concentration in China and concerns around government-sponsored pools — it’s worth asking how one of the critical goals of Bitcoin is being affected. Specifically, is the current trajectory for mining pools making Bitcoin more centralized?

According to a recent Coinmetrics report, the mining industry is becoming somewhat more decentralized overall as new areas around the world open up for mining, though China’s role is also continuing to grow.

“Pooled mining is always a potential risk as an attack vector, but fortunately it’s relatively easy for miners to switch pools, so it only constitutes a short-term threat,” he told Bitcoin Magazine.

For his part, Porter sees some decentralization coming with increasing institutionalization.

As new companies, including exchanges, offer mining services to clients, they will work with a pool or create their own. Porter cited the examples of Binance, Huobi and OKEx, which, in addition to exchange services, now operate mining pools so that miners can collect their block rewards and seamlessly exchange in the same transaction.

“I think you’ll see the same thing develop in other markets as hash rate continues to expand outside of Asia,” Porter said.

While hash rate expansion out of China would go a long way in decentralizing Bitcoin mining, it may not necessarily occur via mining pools. More institutional mining operations are springing up in North America, for instance, raising questions about whether hash rate decentralization will occur via these operations or mining pools.

The ability for institutions outside of China to secure and operate mining equipment is key to decentralized growth, according to Mow.

“Things are much better now that we have multiple ASIC manufacturers, hosting providers like Blockstream and hash rate being more evenly distributed amongst pools,” he said.

“No, Core Scientific will need to connect to a pool to have the best chance to find blocks,” he said. “There is no way they can compete against us, for example, when Poolin has around 16 percent (in the past year) of the hash rate.”