Why is Bitcoin Price Growing Slower and Slower? 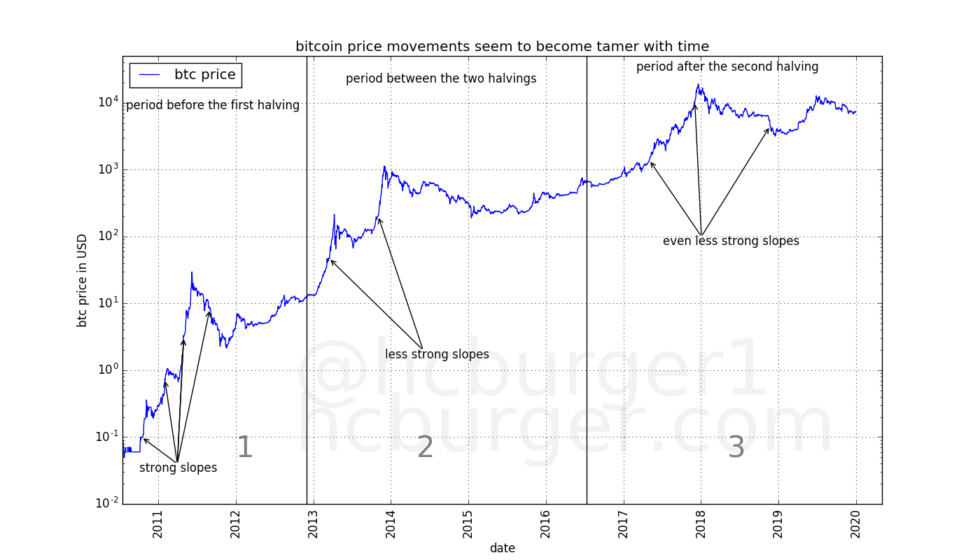 The potential short-term and long-term growth prospects of bitcoin can be gauged from the ongoing price activity. BTC price is facing increasing resistance on its way up. Volatility is decreasing with time. What does this mean for bitcoin’s overall outlook?

A plausible explanation for the observations is investment capital. It takes more and more fiat currency to move BTC’s price higher. Apparently, it is becoming increasingly difficult to find the requisite capital to do so.

Future bull markets are expected to be much slower and long term bitcoin returns will be less as per the published study.

Gone are the days, when it was relatively easier to bring significant changes in the bitcoin price action. BTC trading was not physically possible until July 17, 2010. Then when bitcoin’s price was around $0.1, increasing BTC’s valuation by 100 percent required less capital. The situation wasn’t the same when the benchmark crypto’s price rose from $10,000 to $20,000 in late 2017 – early 2018, and earlier this year.

Although the rallies were mostly fuelled by retail interest and the ICO boom, the inflow of capital was sumptuous, resulting in a terrific surge of the total cryptocurrency market cap to around $800 billion.

This would be highly improbable now, as ‘attracting more and more people to invest in bitcoin, or finding exceptionally wealthy investors will become more and more difficult. Although institutional investment in bitcoin and the crypto market is expected to rise manifold according to noted global fintech leaders.

Just not long-term price growth even short-term explosive rallies will become increasingly less as volatility will reduce and bull markets will take longer timeframes to develop.

There’s Still Light at the End of the Tunnel

Mr. Burger’s analysis is heavily drawn from the bitcoin price model that considers growth with diminishing returns. That also puts all outrageous BTC predictions to rest, as they (over the top predictions) consider that bitcoin’s price will never slow down and always keep growing.

However, all hope is not lost. Even though the non-diminishing price model does not guarantee humongous returns, bitcoin will still continue to grow from strength to strength and outperform most traditional assets.

Bitcoin’s astounding growth over the last decade was covered today by Bloomberg. This is reminiscent of the fact over a considerable period of time, in spite of numerous bull and bear market cycles, Bitcoin’s long-term promise remains strong.

How do you think will bitcoin’s price grow over the next decade? Share with us your thoughts in the comments below!