Bitcoin has seen some turbulence throughout the past few days. After reeling to lows of $8,100, buyers have since “bought the dip” and helped propel the crypto back towards $9,000.

It is important to note that there does appear to be some heavy resistance at this price region, and its rebound may start slowing down as it struggles to firmly surmount the selling pressure seen here.

One factor that could help propel the benchmark cryptocurrency significantly higher in the days and weeks ahead is a recently remerged technical pattern.

The last time this pattern flashed, Bitcoin saw a 160% rally. But whether history will repeat itself this time around remains to be seen.

At the time of writing, Bitcoin is trading up marginally at its current price of $8,850. This is around the level at which the crypto has been trading throughout the past several days.

It does mark a roughly 10% rebound from lows of just over $8,000, although the selling pressure at $9,000 has slowed its momentum and has even put it at risk of seeing further downside.

The crypto has been able to form what appears to be an inverse head and shoulders pattern.

This is a bullish technical sign that tends to mark mid-term bottoms, and its break above this formations neckline today seems to confirm it as valid – as seen in the below chart offered by an analyst on Twitter.

The inverse head and shoulders pattern isn’t the only thing that could help boost Bitcoin in the days and weeks ahead.

One popular cryptocurrency analyst explained in a recent tweet that the last time BTC posted seven consecutive doji patterns on its weekly chart it subsequently saw a parabolic 160% rally.

Because the crypto has formed this many doji candles throughout the past seven weeks, it is possible that it could be on the cusp of making a massive upside movement – should history repeat itself.

“Look what happened the last time we had 7 consecutive green weekly candles. We had a “doji” candle, followed by a 160% increase. By the looks of it, we’re in for a ride.” 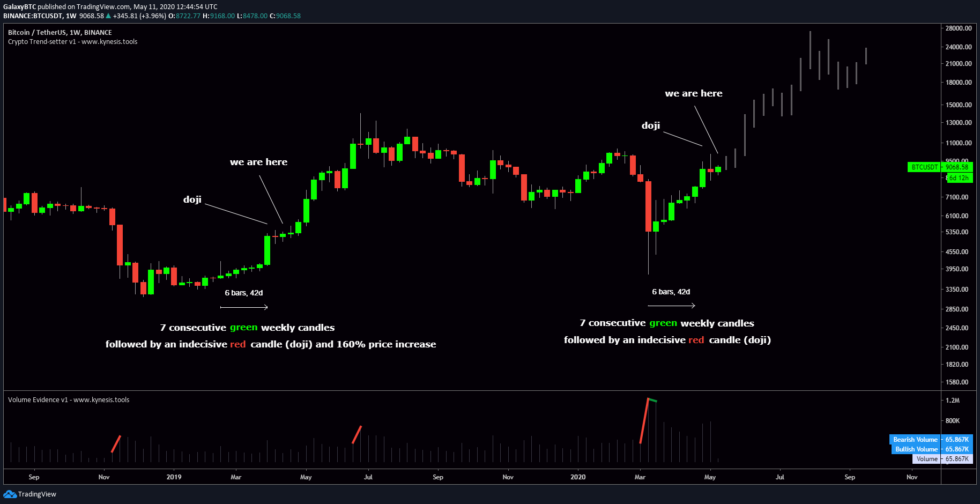