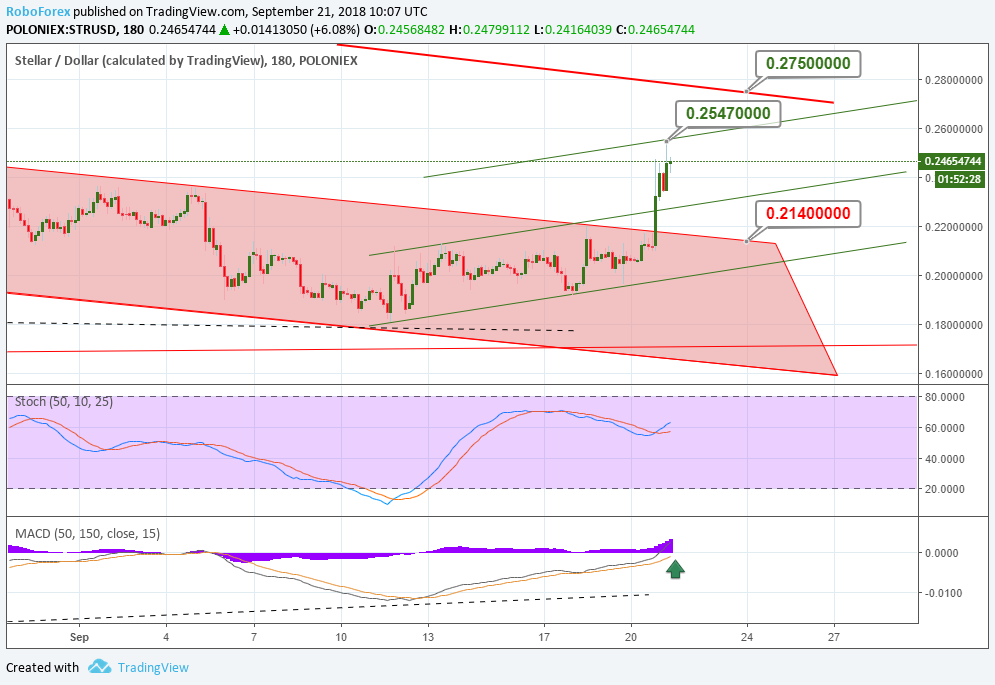 The Stellar price has been rising steadily over the last two days. On Friday, Sept. 21, it is trading at 0.2514, adding 8.60% to its value. This rally is based on both tech signals and the overall market trends, says Dmitriy Gurkovskiy, chief analyst at RoboForex. On H3, Stellar is rising after the MACD convergence and the descending channel resistance breakout. The local target is at the long term channel resistance, i.e. 0.2750. The support is now the ex-resistance, which was previously broken out. The rally is also supported by the Stochastic forming the golden cross and the MACD moving into the positive territory.

On H1, the rally has stopped near the projection channel resistance, which, with the Stochastic moving into the oversold territory, may signal a pullback to the support at 0.2300.

There has not been much news for Stellar recently, but still, there’s been some. For instance, OKCoin has added 5 new instruments to its portfolio, which includes Stellar. This may boost the interest towards the crypto, as it’s now available for trading.

Previously, Stellar obtained the Shariyah Review Bureau (SRB) certificate, as the authority licensed by the Bahrain Central Bank allowed Stellar to establish presence in the country once the recommendations are fulfilled. The SRB was especially interested in the crypto itself, while the authority is absolutely fine with the blockchain itself.

Conquering the Gulf of Persia was a very daring goal, but it looks like nothing is impossible for Stellar. As the management says, the Shariah certificate will help look at the platform and its technologies at another angle. Meanwhile, what Stellar is interested in is overseas payments and asset digitization. As the Islamic financial market is huge and Bahrain is striving to become its center, it looks like Stellar is going the right way.