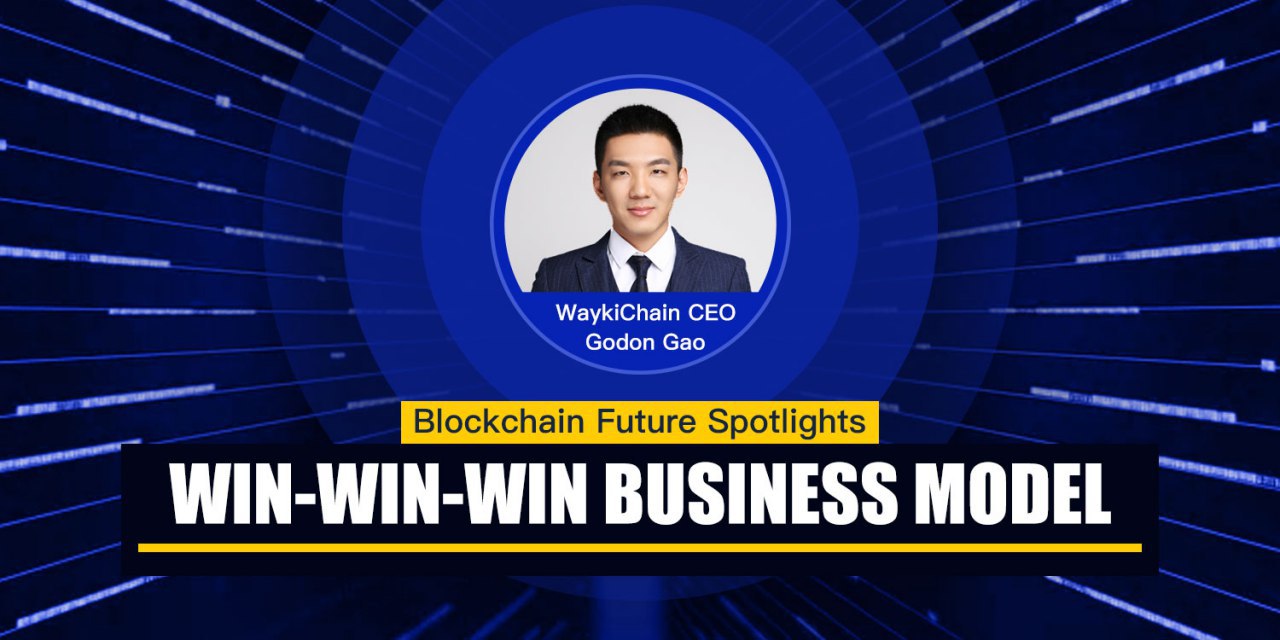 This is a paid press release, which contains forward looking statements, and should be treated as advertising or promotional material. Bitcoin.com is not responsible for or liable for any content, accuracy or quality within the press release.

This article feature quotes returned direct from inquiry to the company CEO Gordon Gao. WaykiChain(WICC) CEO Gordon Gao’s credentials are substantial and they include (according to his LinkedIn page) having previously worked as a ‘senior business associate’ at Alibaba.com. His portfolio also lists a tenure as ‘lead data scientist’ at Fishbowl Marketing which, on its website, front-lines the fact that it features clients as huge as Coca-Cola and the National Restaurant Association.

Gordon announced WaykiChain DApp Funding Program in April. He states that the WaykiChain ecosystem co-building program expects “each role on our public chain to be benefitted” – which is achieved by providing resources for developers, hence users can get a good DApp, which also enriches the public chain ecosystem.

The three way win-win situation is like the flywheel: a dynamic linkage mechanism that will eventually lead to our ecosystem prosperity.

“WaykiChain DApp Funding Program is a developer-friendly program” Gao continues that the team doesn’t intend developers to provide DApps, however they would like to provide developers with help, including: capital, technology, publicity, operation and other aspects.

“It’s all developer-centric.Secondly, what we provide is long-term support and will conduct continuous promotion through media and other large platforms, not only just limited to our community marketing promotion.”

Team Expanding Instead of Layoffs
WaykiChain pays attention to the talent induction. Beyond the senior and executive leadership staff, Gordon Gao says that WaykiChain is pro-actively expanding its core membership,

“Our project’s healthy finances allow us to keep the growth independently. Now we are paying more attention to internal infrastructure and adopting long-term investment strategy.

“The project’s technical talents have expanded four to five times since last year, including the talents of application layer and the public chain development.” Also bear in mind that WaykiChain successes come in spite of having formed in 2018, a tumultuous year for blockchain and cryptocurrencies for economic reasons (as reflected in the market): and a time when many other companies in the industry were laying off employees en-masse.

However, WaykiChain team constantly expands, with an increase in number from around 60 people in 2018 to around 100 people now. This trend of team expansion is suprising in blockchain industry in the hard time, and Gordon Gao mentioned that he is looking forward tobbuilding a world-class leading public chain with the joint efforts of WaykiChianers.

Gordon Gao:
“From nothing to something is really something.”
“Throughout the violent swings; the peaks and valleys experienced by all throughout the restless 2018. We were extremely dedicated.”
“Our vigorous marketing publicity sky-rocketed users + community member numbers to over 300,000, within only a few months.”

Surmounting The Challenges Of Tomorrow

“There is always a solution.”
At present, the market is still skeptical about whether blockchain is profitable. In Gordon Gao’s own words, the WaykiChain business model “lacks experience”, and so the team intends on sticking to its core concept and principles: believing that a fair and transparent business model will always be welcome.

“In order to build a tier-one public chain, we recruit excellent technical talents all over around the world, and provide high treatment and welfare for them; Pay attention to talent training, provides them with their own growth space and prospects.”

“We are committed to conduct technological breakthroughs and will pursuit this project’s image to the whole world.”

“As I might say, there is always a Solution. Difficulties and challenges are nothing to stop us from stepping forward.”

On the technical level: whilst WaykiChain claims a complete plan in this regard, it currently faces a barrier in the form of high-demand for talent – which Gao states is difficult in the bear market. Another challenge is international market expansion. “Due to the cultural differences, there are great differences in people’s concerns between domestic market and overseas market. Fortunately, our team has many talents are overseas returnees.This could do some help. “We are constantly attracting overseas talents, teams and seed users to join us; and the greatest two values we seek in this capacity are effort and time. Our team’s exploration of overseas markets and industry knowledge keep progressing.”

“Filter the Noise and Stay Ahead of the Pack”
WaykiChain meets the criteria of defining factors for public and investor importance laid out in the introduction (such as technical, conceptual, and quantitative standards of excellence). This is why we have decided to feature the project, which arguably saw its formative years in 2018 – when it seemed that the bear market was never going to end. Gordon Gao has keen industry insights. He gives out overall development strategy 2019 and his win-win-win business model. Gordon states that this was “the best time (in our opinion) to ‘polish’ the sword.” by “improving security, stability, efficiency and convenience for our public chain’s bottom layer” whilst “cultivating technology developers, building communities, and building overseas consensus.”

According to Gordon, WaykiChain’s development plan for this year can be
summarized into focuses on three major parts:
 To open up the business model.
 Public chain development.
 Global consensus building.

1. Business Model Open-up:
The business model open-up we expected is to let each role in the ecosystem get the best benefits through the decentralized system. Here, the three main roles I mentioned include users: developers and the public chain.

Open source enables developers and users to participate in deployment and provides operators with simpler and easier products. WaykiChain provides a technology platform for any operator to reach users for profit. Users can also choose their own games. When users become active on our public chain, WICC will become increasingly popular. It forms a win-win-win situation.

 Security:
To ensure the technical security of the entire public chain, including security monitoring, such as black swan event warning and processing mechanism, emergency system and continuous repairing of public chain loopholes. The teams are constantly testing the public chain for vulnerabilities every day. In addition, the company hired a professional code auditor to conduct a comprehensive and detailed code audit of WaykiChain.

We also released a reward program for security breaches.Once a bug found, we reward the bug-finder. This needs to be done consistently in a long run.

Opening up business model is to let each role on public chain get profit. In addition to constantly optimizing and improving the stability of public chain, we will also set up a 24-hour emergency rescue team later.

‘Usability’ means that developers can easily and quickly access the public chain:
it includes development usability and functional usability. ‘Development usability’ refers to the improvement of virtual machines, the improvement of developer tools and documentation, and the easy access of invoking various interfaces. This is why we feature our own stablecoin (WICC) which we expect to be designed at the bottom layer of the public chain. Stablecoin is the shortest path on the real asset chain and also the easiest path to understand.

A stablecoin can keep the corresponding value of digital currency stable and are more suitable for circulation in application scenarios. With the support of a stablecoin, we can build a bridge between the physical world and the blockchain world.

A stablecoin is a cryptocurrency designed for price stability, such that it can function as medium of exchange and unit of account as an alternative to fiat currencies. It should generally be as effective for making payments as the RMB, but still exhibit the characteristics of WICC; transaction immutability, censorship resistance and decentralization.

For the general public, the price fluctuations of cryptocurrencies are actually pretty hard to accept.But stablecoins are easier to circulate in application scenarios and are more easily accepted by the public because of their constant value. That’s why It can also helps us to make it easier for developers to develop DApps on our public chain.

Through the above four points, we are committed to helping developers more easily develop their own DApps on our public chain and more easily achieve commercial value.

Now digital currency opportunities are more from overseas. We already have a certain degree of popularity in China, but overseas market is a new world for us. Our overseas market penetration rate is still very small, which means that the overseas input-output ratio will be much higher.

The third reason is that at present, the whole digital currency is still affected by the bear market downturn. Domestic users and foreign users hold entirely different ideas towards market float.

This is a paid press release. Readers should do their own due diligence before taking any actions related to the promoted company or any of its affiliates or services. Bitcoin.com is not responsible, directly or indirectly, for any damage or loss caused or alleged to be caused by or in connection with the use of or reliance on any content, goods or services mentioned in the press release.