Home Bitcoin Betting Peter Brandt Explains the When and How

Peter Brandt Explains the When and How 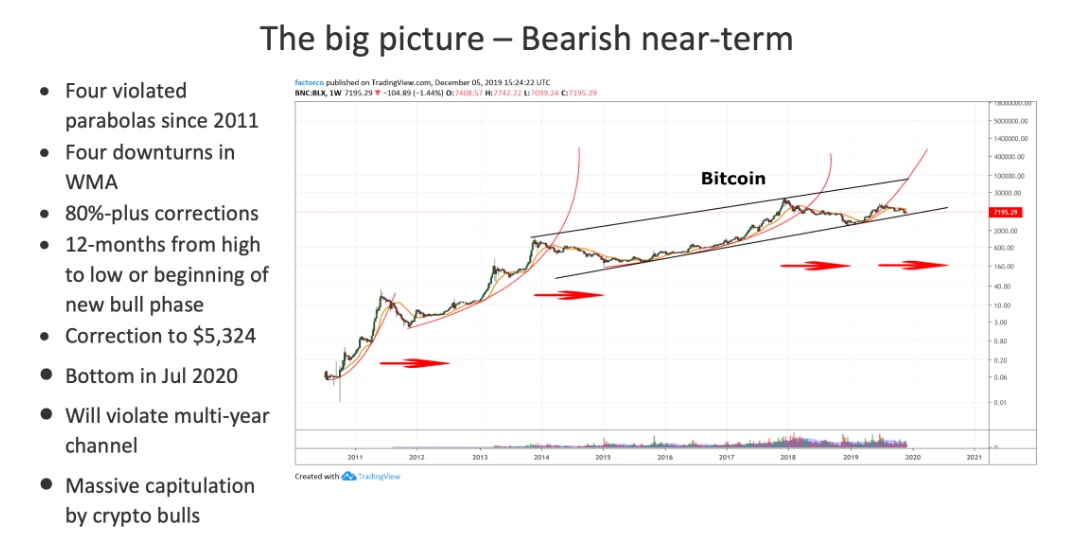 Bitcoin is heading towards the $100,000 mark, according to veteran commodity trader Peter Brandt, who shared his analysis in a new video clip. However, there is a scenario in which the oldest cryptocurrency turns bearish in the near-term.

Bitcoin is at Crossroad Area

According to Brandt, Bitcoin is still moving within its historic bull trend, which has seen consecutive higher highs and higher lows.

While he believes that the cryptocurrency will stick to the bullish narrative in the coming years until it breaks $100,000, there are two main scenarios to expect before that happens. Unsurprisingly, one is bearish and the other is bullish.

The price is currently at a crossroad zone and might go for one of the scenarios soon. Right now, it is trading very close to the lower boundary of a multi-year channel. If the price action decides to continue correcting, then we might see Bitcoin bottoming out at $5,324 by July 2020.

The potential low is based on previous patterns, according to which Bitcoin has violated parabolic moves four times since 2011. Every downturn came with an 80%-plus correction and lasted 12 months from the peak to the low, according to Brandt’s analysis.

Accordingly, the current correction will likely find strong support at $5,324 by this summer if Bitcoin takes the bearish route. This is because the recent high was reached in June, when the cryptocurrency rallied to over $13,000. Up until then, it’s anticipated that many crypto bulls will capitulate.

This potential correction could likely scare even the most devoted Bitcoin maximalists and hodlers, Brandt says, citing his multi-year trading experience in other commodity markets. In fact, he believes that 90% of bulls who are active on social media will start capitulating sooner or later.

In the best-case scenario, the BTC price doesn’t break the lower boundary of the multi-year channel and bounces back to new highs. In fact, Brandt asserts that the new peaks could come as early as next year.

Interestingly, many Bitcoin bulls expect the price to update the all-time high on the upcoming halving event, which is scheduled for the first half of 2020. This scenario is further supported by PlanB’s popular stock-to-flow model.

Which path do you think Bitcoin will go? Share your thoughts in the comments section!