Home Bitcoin Betting On the Coast of El Salvador, Bitcoin Is Becoming the Standard

On the Coast of El Salvador, Bitcoin Is Becoming the Standard 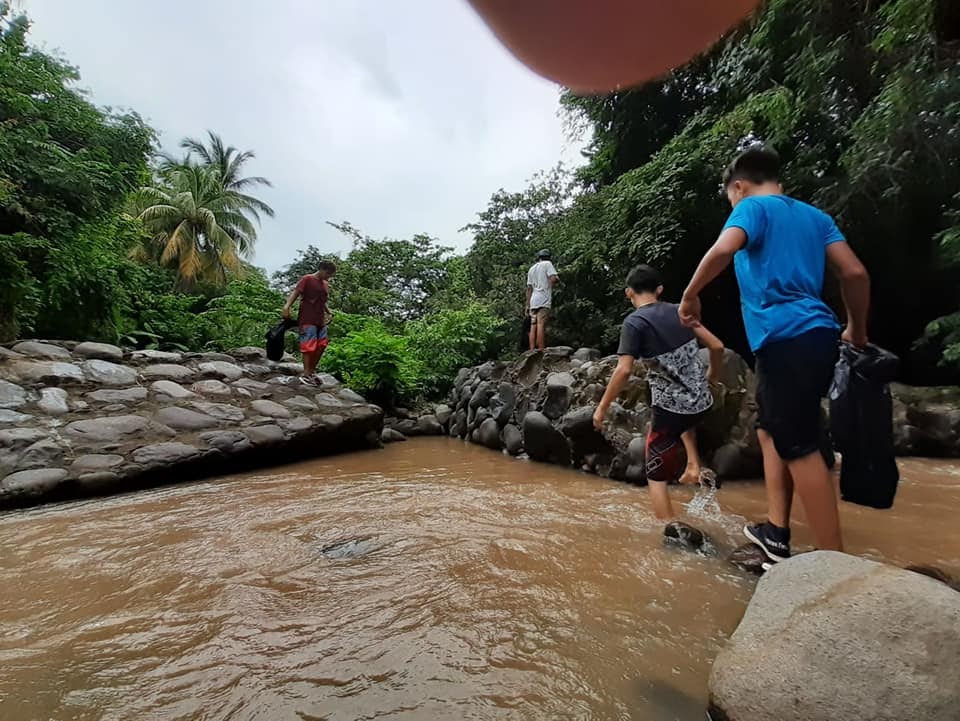 When Michael Peterson made a semi-permanent move to El Salvador, the California native’s motive was simple and, well, fittingly expected: He wanted a place to surf in the wintertime.

“I came to El Salvador on a surf trip and I just kind of fell in love,” he explained. “The water’s warm, the waves are great, the people are super friendly. So my wife and I decided to buy a house and move there — that was 14 years ago.”

Now, in a less-than-expected twist, Peterson is working on bootstrapping bitcoin economies in two villages on the eastern coast of the country: Punta Mango and El Zonte. More than just an economic mission, Peterson’s work has social ramifications, too; its primary focus is to provide El Salvadoran youth with bitcoin-earning employment. The aim here is twofold: kickstart a bitcoin economy and keep kids in their local communities and out of the clutches of El Salvadoran gangs.

Peterson and his wife weren’t always focused on Bitcoin philanthropy, though shortly after they made El Salvador their second home, the couple found themselves engaging in nonprofit work.

Peterson told me that during the honeymoon phase of their new living arrangement, he and his wife would just vacation in the Central American country for a couple of months in the winters, returning back home to California to run their seasonal food business in the summers.

Eventually, though, their vacations started lasting a bit longer — and began involving charity work. They embedded with local nonprofits and churches before discovering a need for “an umbrella organization” to coordinate efforts between all of the various organizations on the ground in El Salvador.

Then, in 2017, one charity approached Peterson after it received a bitcoin donation, asking him what they should do with it. The donor was actually looking for responsible teams to put some of his bitcoin hoard (he bought a trove of the stuff at $0.05) to good use.

“It fascinated me. Because I realized there were many early bitcoin investors who were sitting on huge gains … As governments started cracking down on taxes, it would be beneficial to them to donate some of the bitcoin they invested in. And they were sitting on gains they wouldn’t be able to spend anyway,” Peterson told Bitcoin Magazine.

Peterson would eventually travel back to California to meet with this whale to discuss what this philanthropic effort would look like. Except, the meeting didn’t go as he expected — in fact, he didn’t meet Mr. Whale at all.

So Peterson settled on the community in his own (new) backyard.

The project Peterson created, dubbed Bitcoin Beach, wants to alleviate poverty in the region. But it’s not going to do this by simply handing out bitcoin to residents. Rather, it aims to create a circular economy that is powered by bitcoin.

“The goal is to get people to actually utilize it in a real way where it would be circulating, people would be learning how to use it and it would be consequential in their lives,” Peterson said.

You’d be hard-pressed to find a more fertile ground to cultivate a homegrown bitcoin economy. Peterson estimates that only 10 percent of the locals actually hold bank accounts. Cash is king, but handling cash can often be cumbersome and comes with self-custody and security pitfalls.

Half of the population does have smartphones, though, so Bitcoin Beach is tapping into a major resource in mobile communication, whose importance Peterson put on par with food.

“Phones are the priority for people,” he said, adding that at first, he was a bit worried about trying to get bitcoin in the hands of the El Salvadoran population. But this turned out to be “less of a problem than [Peterson] imagined.”

Initially, the project — or rather, the digital cash underpinning it — was met by understandable incredulity from locals. As Peterson explained: “That’s the first question people ask: What can I do with it?”

When onboarding shopkeepers, Peterson appeased their skepticism by acting as a guaranteed buyer: If they need cash, Bitcoin Beach is a fount of liquidity. As more merchants and individuals were onboarded, though, the skepticism morphed into acceptance. Not only did these new Bitcoiners see that the whole thing wasn’t a scam, but they got a sense that using bitcoin was actually easier than schlepping around paper bills.

“The more people use it, they see how easy it is to have it on their phone than having to carry a bunch of cash around all the time. A lightbulb goes off and they realize it’s easier than using cash,” Peterson told us.

Peterson holds that “usability is probably the most important thing for wider adoption,” which is why, ironic as it may seem, the entire village runs on the Lightning Network. Bitcoin Beach onboards the locals with Wallet of Satoshi, a user-friendly Lightning wallet with a smooth UX. It’s custodial, but what it lacks in self-custody, it makes up for in user friendliness, and that’s everything for the El Salvadorans who use it.

Peterson told us that so far, Bitcoin Beach has onboarded roughly 100 new users, 50 of whom are students, and that $5,000 in bitcoin is circulating at any given time. It may not sound like a large impact, but respective to the village population (roughly 1,000) and the income levels of its residents, it’s an encouraging start, Peterson believes.

In the flagship Bitcoin village of El Zonte, for example, you can use bitcoin to pay for a haircut, get your nails done and chow down on some local dishes (like some delicious pupusas). Soon, you’ll even be able to buy a cup of coffee with it and go to the doctor’s office for a checkup.

The expirement’s progress isn’t just on paper, either. People are actually using bitcoin in their day to day. One grocery store owner, Rosalina Franco, told Bitcoin Magazine via a message translated by Peterson that she has customers paying in bitcoin daily. She hopes to hold some of this revenue one day, but right now she is “using her profits to expand inventory” on her growing business.

Another small store owner, Janeth Guillen, said that bitcoin has even brought her new clientele.

“Since we started accepting bitcoin,” she said in a translated message, “we have gotten a number of new clients.”

One frustration she does have, though, is that she can’t accept payments when the internet is down.

On the other side of these merchant transactions, half of the Bitcoiners in Bitcoin Beach’s realm come from the El Salvadoran youth community. Currently, the team pays local adolescents and teens in bitcoin for cleaning up the surrounding area, lifeguarding at the beach or for achieving good marks in school. It also supports four university students with a monthly $50 stipend paid in bitcoin.

The overarching goal here is to keep these kids employed and rooted in their communities, lest they fall prey to the temptations of El Salvador’s gang landscape.

“There’s a big issue in El Salvador with gangs,” Peterson opined. “For the last several years, it’s had the highest murder rate in the world. A lot of gangs start recruiting at 10 to 13 years old, so we like to focus on the youth, particularly 10- to 15-year-olds, and provide them employment — make sure they stay in school.”

Hopefully the program inspires a camaraderie in the impressionable age group, one that instills in them a sense of community and pride in their home. As they become more socially productive and invest in their home villages, the thinking goes that they won’t be enticed to join a gang.

And they get to accumulate bitcoin, too — a win-win all around.

Since he gets paid in only bitcoin, Martinez spends it “all the time” on groceries and the like to help out his mother. He told us that he doesn’t hold a bank account, but “now that [he] has bitcoin, [he] doesn’t need one.”

Another teenager, Ismael Galdames, said that one of the perks about using bitcoin is that he can store his money on his phone.

“I don’t have to worry about bringing money with me,” he espoused in a translated message.

This banking on Bitcoin strikes at the core of Bitcoin Beach’s MO. As Peterson put it, “Most of them don’t have any other [banking] options” outside of cash. Now, they have the dollar and bitcoin — and Peterson aims to make sats the standard for these communities.

As Bitcoin Beach spins up this circular economy, its founder is looking toward the day when he and his team can take their hands off the wheel. He envisions a future where citizens and tourists alike use bitcoin as a currency for local commerce, but importantly, he hopes the virus spreads across El Salvador to disrupt a market that Bitcoin knows well: remittances.

“Once we stop running it, it’s got to be sustaining. So we want to encourage both tourists to use bitcoin but, more importantly, families that send money from the U.S. back home — we want them to start sending in bitcoin,” he said, adding that an impressive 22 percent of El Salvador’s annual GDP (roughly $5 billion) is siphoned off from remittances.

The end game, as with hyperbitcoinization, is to slowly but steadily eradicate fiat use in these communities. As Bitcoin Beach enters 2020, it hopes to expand to 50 more families and fund more community development projects to build on its inaugural year.

With each day — and each pupusa purchased — comes progress. And progress that typifies why Satoshi created Bitcoin in the first place: to create a much-needed alternative in places where the alternatives don’t exist.