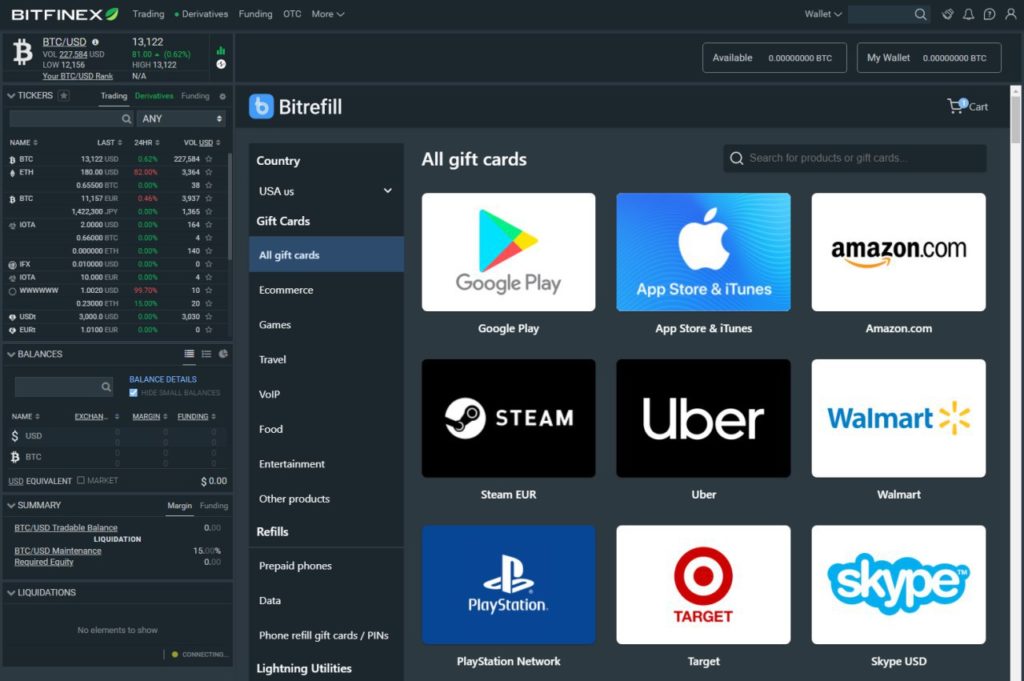 The Lightning Network may have just gotten its first business-to-business (B2B) payment channel.

Two of the most prominent Bitcoin companies in the space are collaborating: Bitfinex users can now shop at Bitrefill, straight from their trading environment on bitfinex.com. With access to the entire Bitrefill catalog, Bitfinex customers can use their account balance to buy a wide range of gift cards or to top up their prepaid phone credit. And, enabling the transfer of funds between Bitfinex and Bitrefill, the two companies have established a customized Lightning channel.

“As far as I know, this is the first time Lightning is used for B2B,” Bitrefill CCO John Carvalho told Bitcoin Magazine. “I never heard of anyone else setting up dynamic settlement.”

Bitfinex — one of the biggest Bitcoin exchanges in the world by trading volume — just recently, on November 28, 2019, launched the option for users to deposit and withdraw funds over the Lightning Network. As the first major exchange to offer this feature, Bitfinex has immediately taken a step further and integrated the Layer 2 protocol into its backend as well.

“Bitcoin’s use as a means of payment represents an important milestone in the inevitable journey towards mass adoption,” said Bitfinex CTO Paolo Ardoino in statement. “This is why the Lightning Network is so important. As an exchange, Bitfinex is at the forefront of developing solutions utilizing this technology.”

The way Bitfinex and Bitrefill see it, this integration means that the Lightning Network is one step closer to “closing the loop” toward a circular economy: a system that doesn’t depend on fiat currency or even on-chain Bitcoin transactions for settlement. In this case, Bitfinex accepts Lightning deposits. From their funded account, it lets customers purchase a wide range of products and services on Bitrefill, which is subsequently paid over Lightning as well. (Most gift card selling merchants will presumably still be paid in fiat currency by Bitrefill, however.)

With their customized payment channel, orders between Bitfinex and Bitrefill are settled automatically and instantly, removing the need for credit term relationships. Leveraging the Lightning Network, payments will, of course, also be cheap as well as private, while leaving only a minimal footprint on the Bitcoin blockchain when channels are opened or closed.

In 2014, Bitrefill started out as a provider of phone credit and (a little later) digital gift cards, effectively allowing Bitcoin users to swap their coins for goods and services without needing to convert back to fiat currency. Over the years, the Stockholm-based startup created an international catalog with over 2,000 gift cards, which include several of the biggest merchants in the world, like Apple, Amazon and Uber.

More recently, the startup has been establishing itself as a pioneer in the Lightning space. For one, Bitrefill was among the very first companies to start accepting Lightning transactions for payments. But going beyond that, the company has been rolling out several Lightning-specific services with names like “Thor channels” and “Turbo-charged channels,” offering convenient solutions for Bitcoin users who wish to set up Lightning channels.

Bitrefill now wants to help Bitcoin exchanges integrate Lightning, with Bitfinex as a first example of this, said Carvalho.

“We believe that getting Bitcoin exchanges on to the Lightning Network early is integral to preparing for the next wave of adoption and building out a parallel economy for Bitcoin,” he said.

“We coordinated on our Lightning setups to support fat channels [Lightning channels that offer more liquidity than regular payment channels] and incorporate them into our integration. After the dust settles, we'll be working with them to establish more automated systems for channel liquidity management, opening and closing channels, etcetera.”