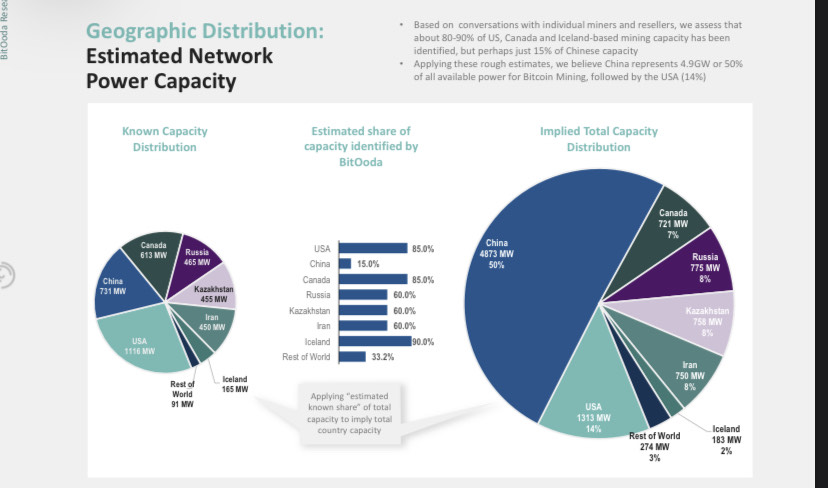 Bitcoin miners have successfully survived the 2020 Halving and COVID-19, and the network is now seeing some of its highest hash rates ever as these operations power up new equipment and reach new levels of decentralization going into the second decade of bitcoin mining.

China still dominates the bitcoin mining space, although the percentage of the hash rate coming from the country has dropped recently, from around 65 percent in early 2020 to about 50 percent more recently as Chinese mining farms are weathering a particularly difficult monsoon season and the government is sending mixed signals that Bitcoin may be under attack as part of a campaign to promote the new digital yuan.

Meanwhile, the U.S., Russia, Iceland, Central Asia and South America, among other regions, are all seeing continued growth in mining as miners benefit from plentiful, cheap, stranded energy in these regions — principally hydroelectric power, wind power or oil and gas, depending on the location.

In addition, Kazakhstan has been in the news lately as its government partnered with miners through a $715 million investment fund.

The following graph from a report prepared by BitOoda for Fidelity Digital shows an estimated breakdown of hash power around the world, indicating that China contributes 50 percent of the world’s hash power, while the U.S. is in second place with 14 percent.

It should be noted though that other analyses have placed China’s share as high as 65 percent of the total hash rate, with the U.S. at 7.2 percent and Russia at 6.9 percent.

The U.S. and Canada make up 21 percent of the global hash rate, at least in BitOoda’s analysis, second only to China. And that share is expected to go up by many in the industry.

In a recent live stream hosted by Bitcoin Magazine, Elsa Zhao, the marketing manager for Chinese mining giant Whatsminer, confirmed that her company is focusing its expansion plans outside of China.

In an announcement officially coming soon, the company, second only to Bitmain in its singular ability to influence bitcoin mining, will offer details about its new mining equipment manufacturing plant planned for the U.S..

Bitmain, a Chinese operation that is still the largest mining equipment manufacturer in the world, is weathering its own storm: a company feud between co-founders Micree Zhan and Jihan Wu that may split the company in half.

Bitmain has two manufacturing locations — one in China for the Chinese market and one in Malaysia for international sales. As far as it’s mining operations, Bitmain seems poised to continue its expansion into the U.S.

In a recent interview with Bitcoin Magazine’s John Riggins, Bitmain’s head of operations for North America, Raymond Walintukan, said that he sees more decentralization out of China in Bitmain’s future, with the company building on its current operations in North America.

Walintukan works from a mining farm in interior Washington State, where stranded hydroelectric power is plentiful and cheap. Bitmain also has mining farms in Texas and Tennessee. He stressed that Bitmain is now an international company, as much as it is a Chinese company.

Ryan Porter, head of business development for mining consultants BitOoda, told Bitcoin Magazine in an interview that more investors, including some from China, are inquiring about new mining opportunities in North America.

“We certainly see a reason to believe that a significant portion of hash power will migrate to North America,” said Porter. “The existing infrastructure, cost of power and regulatory stability here is competitive globally.”

And the decentralization of hardware manufacturing could become a major factor for continued migration in the near future.

“China has been a real industry innovator in producing the leading ASIC manufacturers,” Porter added. “However, with TSMC (Taiwan Semiconductor Manufacturing Company) planning to build a plant in Arizona, there could be domestic hardware manufacturers that emerge, which would also be a catalyst for hash to migrate outside of China.”

So, despite more expensive power pricing — averaging from 3.5 to 4 cents per MW, which is higher than in places like Central Asia and South America — North America is still considered a desirable hub for bitcoin mining because of the relative stability of the political environment and the ability to lock in multi-year power contracts (China averages just under 1 cent per MW).

The Importance (And Ongoing Challenge) Of Bitcoin Mining Decentralization

In a recently released Coinmetrics report, researchers noted that the distribution of mining and hash rate is the most important factor in “sustaining a secure, censorship-resistant payments and savings system.”

It noted that mining is the anchor and the “effective decentralization” that provides security for the Bitcoin network. The report uses a metric it called the “Nakamoto coefficient,” which measures the number of pools that would need to collaborate to launch a 51 percent attack on the network. For instance, iIn 2014, mining pool GHash.io controlled over half of the network’s hash power for about a day, giving Bitcoin a Nakamoto coefficient of 1.

The researchers concluded that bitcoin mining has become increasingly decentralized, with a Nakamoto coefficient of four.

Like most profitable enterprises within the legacy financial system, the natural pull of bitcoin mining is toward more control and organization by one or a relatively small number of controlling bodies.

At this point in the early history of Bitcoin, it is inevitable that a small and informed group of early adopters, like Bitcoin Core developers, will move the system forward in an organized fashion.

But, as Coinmetrics’ researchers argue, it’s important to have significant bitcoin mining take place in different parts of the world.

And even though there are some signs that Bitcoin mining is becoming more decentralized, especially with Chinese operations moving some of their has power to North America, there is still a long way to go before this industry can be considered truly international.

Coinmetrics noted that, even as hash power migrates from China, Bitcoin mining is still at risk of centralization through possible state level coercion and vertical and horizontal integration.

“While Bitcoin mining is distributed, it’s still at risk of centralization through state-level coercion and vertical and horizontal integration. Several exchanges, including Binance, OKEx, and Huobi, operate mining pools. BitMAIN, a hardware manufacturer, owns both BTC.com and AntPool, and is the only investor in ViaBTC,” noted the report.

And, in China, mining pools continue to grow despite a particularly difficult year. As long as there is cheap power, the incentive to build economies of scale in China will grow.

New China-based mining pool Lubion, which has China and Iran as its principal sources of hash power, only came onto the scene in March 2020 but is already in the top-ten of pools by hash, rivalling longer-standing pools like F2Pool (also based in China).

Still, there is reason for mining decentralization advocates to remain optimistic.

Noting that Kazakhstan could be on track to become one of the world’s largest Bitcoin mining hubs as the country sets up a $715 million development fund, Mow said:

“Bitcoin mining will become a strategic investment sector for many nation states. Slowly at first, and then all at once.”