Crypto Exchanges Are Cracking Down on Hackers, Chainalysis Report 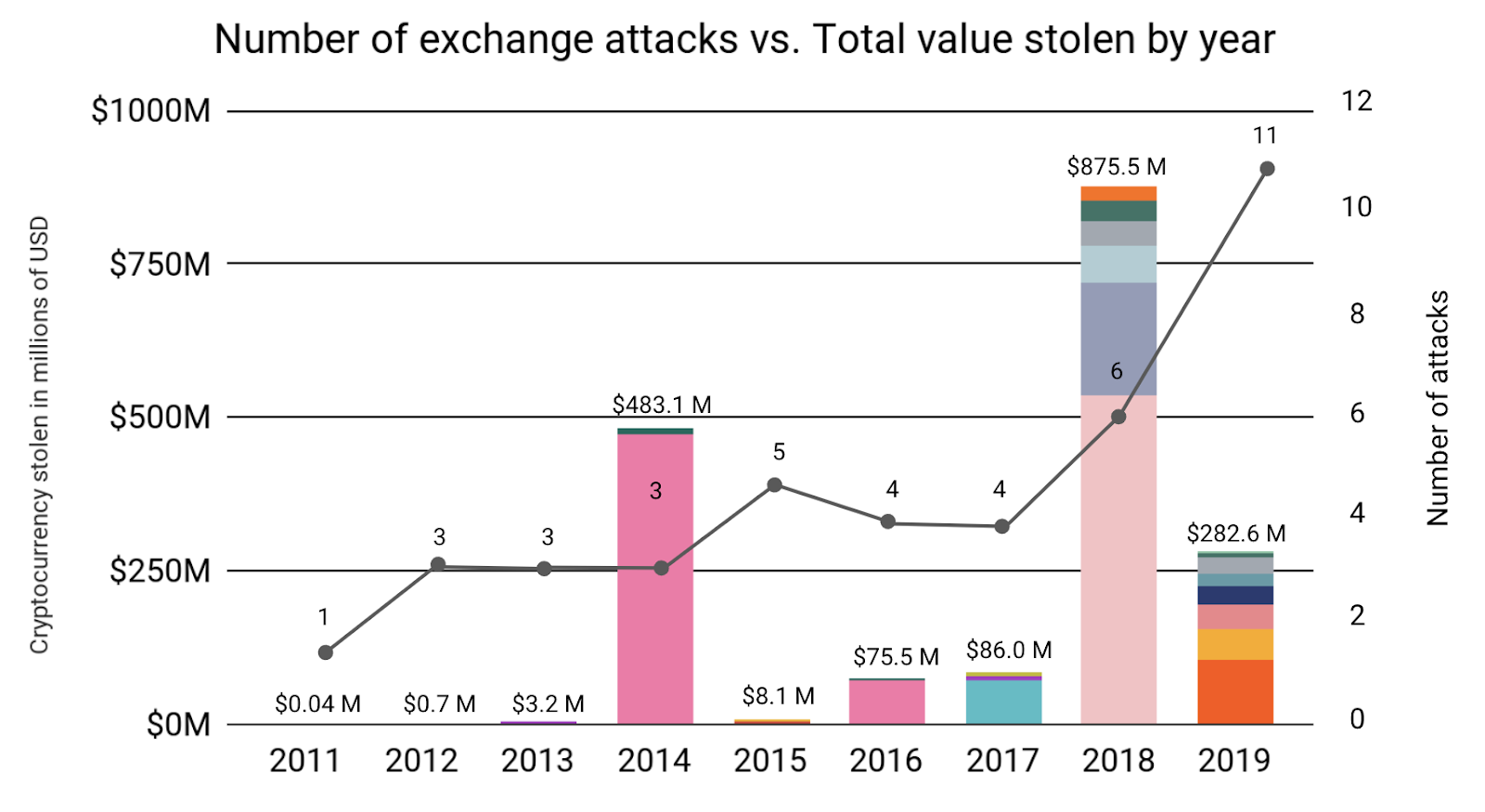 Hacking attacks on crypto exchanges are becoming the norm, according to a recent report by Chainalysis. However, this also means that platforms are much better prepared, which explains why the total value of stolen crypto funds declined last year.

Blockchain analysis firm Chainalysis published on Tuesday an excerpt of its 2020 Crypto Crime Report, with the full version being scheduled for release later this month. According to the research, 2019 saw 11 hacking attacks on crypto exchanges, compared to 6 in 2018, which was a record at the time.

However, even though hackers doubled their previous record in terms of how many platforms they reached, the amount of stolen funds is three times lower than in 2018. The colors on the chart below show the contribution of each hack to the total amounts stolen in a year:

Thus, there was no major hack comparable to Mt. Gox in 2014 or Coincheck in 2018. In fact, the total amount stolen from exchanges fell to $283 million worth of crypto last year. The figure is only slightly more than half of the amount stolen from Japanese exchange, Coincheck.

Chainalysis touched upon all kinds of hacks, including those implementing exploitation of technical vulnerabilities as well as those that rely on social engineering or other forms of manipulation.

Another important aspect to consider is that the report covered attacks related to exchanges only. Thus, it ignored payment processors, investment platforms, and wallet providers.

By far the largest crypto hack last year was carried out against Coinbene. The Singapore-based exchange lost $105 million worth of ERC-20 tokens. Upbit, Binance, and BITPoint come next, being deprived of $49 million, $40 million, and $32 million worth of crypto, respectively.

We reported on some of those hacks in a roundup at the end of the year.

Where Do Funds End Up?

Even though Bitcoin started as a cryptocurrency that enabled anonymous transactions, most blockchains today, including Bitcoin, allow tracking transaction IDs. Thus, Chainalysis monitored the movement of stolen funds and figured out how the cryptocurrencies were liquidated. In most cases, the coins reached other crypto exchanges and then converted to cash.

Interestingly, the percentage of illicit services used as a method of liquidation dropped in 2019 to the lowest level in the last five years, suggesting that the effect of increased regulation is real.

A great portion of stolen funds may stay unspent for years.

In the last few years, crypto exchanges have implemented various security measures to prevent hacking attacks. Judging by the average amount lost per hack, it seems that they’re doing a great job. Many exchanges now maintain a much lower portion of funds in hot wallets, which are less secure. In fact, if you watch Twitter channels like Whale Alert, you can see that major platforms are often moving their crypto funds from hot to cold wallets in large transactions. Other methods include more strict withdrawal authorization, mandatory two-factor authentications for larger transactions, and monitoring transactions.

However, some hackers have also become more sophisticated. They can apply more complex approaches in the way the handle the hacking attacks. Their laundering methods are also more advanced. While this tendency is not welcomed by the crypto community, it proves once again that crypto exchanges are becoming more secure indeed.

For example, the infamous cybercriminal group Lazarus Group, which is said to be connected to the North Korean government, made several changes to its hacking approach, including by adopting sophisticating phishing methods.

Do you trust major crypto exchanges today? Share your thoughts in the comments section!