In the time following the tempered signs of weakness Bitcoin showed yesterday when it dipped below its key support at $7,200, the benchmark cryptocurrency has further extended this downtrend as bulls now defending against a dip below $7,000.

This weakness has led BTC down to a key descending trendline that it recently broke above, with the potential loss of this level being a grim possibility.

The test of this level comes shortly after the crypto broke below another key technical level and this alone could potentially be enough to catalyze some immense near-term bearishness.

At the time of writing, Bitcoin is trading down just under 2% at its current price of $7,080, which marks a slight rebound from daily lows of under $7,000, and a notable decline from highs of over $7,200.

Prior to losing this level overnight, $7,200 has proven to be key support for the cryptocurrency, and some traders had noted that the crypto could see upside if this previous resistance was flipped into support.

Bulls, however, were not able to successfully do so, and the decline below this level has opened the gates for it to plunge lower.

This also comes shortly after it broke below an ascending trendline that was formed in the time following its capitulatory decline to lows of $3,800 in mid-March.

One popular pseudonymous trader on Twitter pointed to this trendline in a recent tweet, concisely stating that he is “expecting further downside.”

Despite this overt weakness, it is important to note that one analyst recently explained that BTC has so far been able to remain above a descending trendline that it recently broke above, with this current declined marking a back test of this level.

“Worth noticing that price is still: – Above red diagonal resistance – Above the resistance of horizontal range. Bias of greater trend is still bullish, this could just be a ‘retest’ – but we are close to invalidation,” he explained while pointing to the below chart. 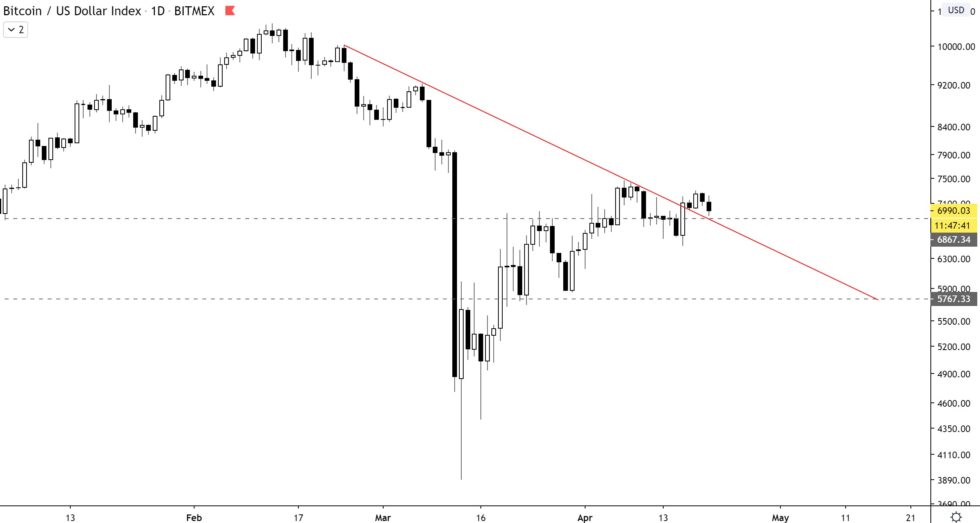 Because BTC is currently teetering above this level, it is possible that the weakness stemming from its recent break below its ascending trendline will be enough to push it down further.