Bitcoin Could “Nuke” Lower Because of This One Resistance Level

Following yesterday’s turbulence, Bitcoin has been able to firmly recapture the support that it had previously established at $6,800, with its recent rebound from lows of $6,600 pointing to some underlying strength amongst the crypto’s bulls.

Although the climb past this level has certainly been a positive near-term sign for BTC, it is imperative to keep in mind that the crypto still remains beneath multiple key resistance levels that could continue suppressing its price action.

One prominent trader is now noting that a sustained bout of trading below $6,900 could lead the benchmark cryptocurrency to “nuke” back towards its March lows.

Bitcoin’s Bulls and Bears Engaged in Intense Battle for Control

At the time of writing, Bitcoin is trading up just under 3% at its current price of $6,870, which marks a notable climb from daily lows of $6,600 that were set yesterday.

It may appear at first glance that Bitcoin is simply caught within another bout of rangebound trading within the upper-$6,000 region, but it is important to note that there is an intense ongoing battle between bulls and bears to gain control of BTC.

The current support that bulls are attempting to defend lies just beneath its current price at $6,800, with this level proving to be important throughout the past week.

BTC also faces some horizontal resistance between $6,900 and $7,000, with these levels coinciding with a key descending trendline that could determine its near-term fate.

One popular crypto analyst spoke about this trendline in a recent tweet, noting that BTC is bearish while trading below it, but bullish if it breaks above it.

BTC Could “Nuke” Lower if This Resistance Holds Strong

Cred, a highly respected cryptocurrency analyst and trader, offered his followers with a highly bearish possibility in a recent post, explaining that a continued defense of $6,900 by bears could be enough to spark a massive decline that leads Bitcoin to “nuke” lower.

“$6900 still an important daily level IMO. If this is going to nuke, it has to hold as resistance. Any intraday (certainly daily) acceptance above $6900 I think shorts get fried and we teleport to the top of the range at $7500-$7600. Candid thoughts annotated on chart,” he noted. 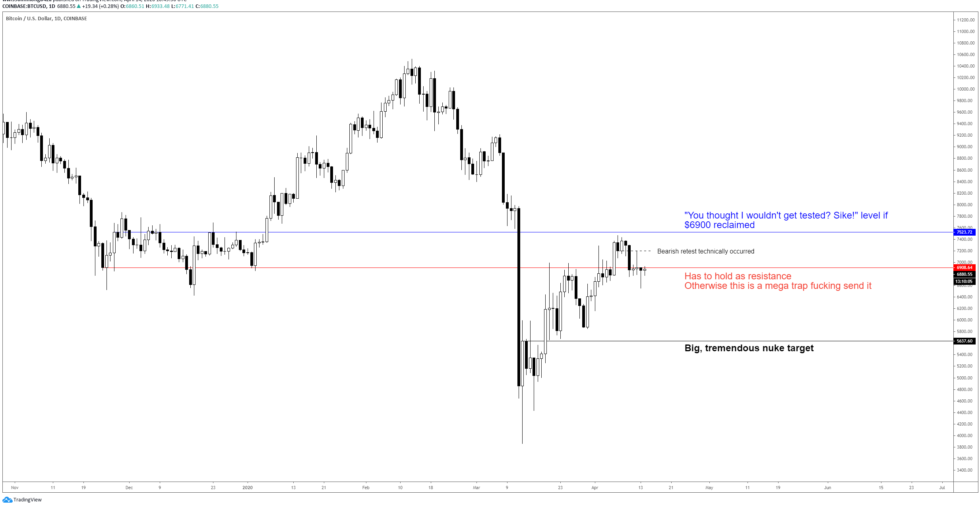 While looking at the above chart, Cred seems to believe that this potential decline will lead Bitcoin down towards $5,600, which is his target if the crypto is unable to find further momentum.